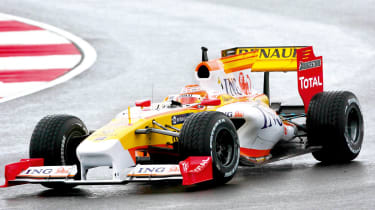 Renault has managed to avoid serious punishment after today’s hearing into its role in race fixing at the 2008 Singapore GP.

The Formula 1 team was called before the sport’s governing body, the FIA, to answer charges that driver Nelson Piquet Jnr was asked to deliberately crash in order to help teammate Fernando Alonso win the race.

The result is a two-year suspended ban from F1 as well as an unlimited ban from FIA events for outgoing team boss Flavio Briatore and a five-year ban for former engineering chief Pat Symonds.

Briatore and Symonds both quit the team last week, after Renault confirmed it wouldn’t dispute the FIA’s charges, effectively admitting to its role in fixing the Singapore race. This admission of guilt was key in ensuring the FIA’s imposed ban is suspended.

Piquet Jnr had initially blamed the crash on his own driver error, but came clean after Renault dropped him partway through this season. He apologised to the governing body for his involvement, and after being offered immunity in exchange for providing evidence, escapes any punishment.

In a statement, he said – ‘I bitterly regret my actions to follow the orders I was given. I wish every day that I had not done it.

‘I have had to learn some very difficult lessons over the last 12 months and reconsider what is valuable in life. What has not changed is my love for Formula One and hunger to race again. I realise that I have to start my career from zero. I can only hope that a team will recognise how badly I was stifled at Renault and give me an opportunity to show what I promised in my career in F3 and GP2. What can be assured is that there will be no driver in Formula One as determined as me to prove myself.’

His former teammate Alonso testified at the hearing, but was ruled to have not been involved in Renault’s race fixing.