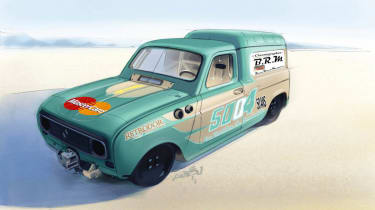 You’ve probably already read about the Skoda Octavia vRS that evo will be taking to the Bonneville Speed Week this year.

But now there’s an even less likely vehicle heading for the salt flats in search of glory. A French team called ‘Triplets de Bonneville’ is attempting to produce the fastest ever Renault 4, to celebrate the iconic car’s 50th anniversary.

First introduced in 1961, production of the Renault 4 continued until 1992. The Bonneville record vehicle is actually a Renault 4 van, which is using a 290bhp turbocharged four-cylinder engine from a 1983 Renault 5 touring car. The drivetrain uses parts cars as diverse at the Clio and Renault 25 GTX turbo.

As with ‘our’ Skoda, the record-attempting van has been fitted with a roll cage, drag racing bucket seat, fire extinguisher and a braking parachute, fitted in the roof.

While the Skoda, driven by EVO’s own Richard Meaden, aims to top 200mph, the French team is aiming for the more modest target of 174mph, a figure that would make the van the fastest Renault 4 ever.