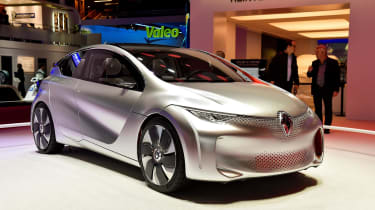 Renault has unveiled its new Eolab concept at the 2014 Paris motor show. With a 1-litre three-pot and electric motor, the hybrid eco-box is said to be capable of 282mpg and produce just 22g/km of CO2, and supposedly previews Renault’s ‘hatch of the future.’

Combined with those efficient numbers is a power output of 141bhp – 74bhp of which comes from the petrol engine – and 147lb ft of torque, as well as a 74mph top speed and 37mile range in full electric mode. There’s no word of performance figures when the petrol engine is called into use, but with a drag coefficient of 0.235 – 30 per cent slipperier than a Clio – the Eolab will most likely posses warm hatch levels of poke.

That aero-efficiency has come thanks to the use of active-aero devices that open and close to regulate cooling and minimise drag. Air channelling guides either side of the bumper, active aero wheel trims, low resistance rubber and tiny cameras in place of door mirrors also help to minimise air and rolling resistance, whilst the car’s air suspension even works to maintain the most efficient stance.

The car has also been developed on a strict diet, and the result is a 955kg kerbweight (around 400kg less than the equivalent Clio). Much of that weight saving has come from the use of unconventional materials in the car’s body and internals, with a significant 130kg being shaved off thanks to its magnesium roof, fixed thermoplastic bonnet and nose structure and all aluminium doors. The windows are also plastic and the cabling is made with aluminium too.

The car is a four-seater featuring a conventional hatch layout, though it only has four doors (including the hatch) as the car’s driver side does without the rear door to save weight. The interior is undeniably concept, with space-age seats and a clean dash certainly appearing to come from a decade ahead. The centrally mounted touch screen is nothing unusual these days, but the smartphone sized door camera screens are, however.

The outside is equally as futuristic, but does feature traits that make it instantly recognisable as a Renault. The most obvious is the large bonnet diamond and surrounding grille shape, but there does seem to be a bit of Clio in the shapely doors. Though they’re designed for efficiency, those channelling guides on the front bumper and that swooping roofline look quite sporty too.

Impressive as it is, the slippery Renault is still some way off matching the efficiency levels of the 313.9mpg Volkswagen XL1. But given that the hybrid diesel German doesn’t offer much change back from £100,000, the futuristic French hatch – which is said to require little more than a well specced supermini – could be much more accessible. We likely won’t see a production version of the Eolab though, rather innovations and technology from it will be trickled into production cars before 2020.