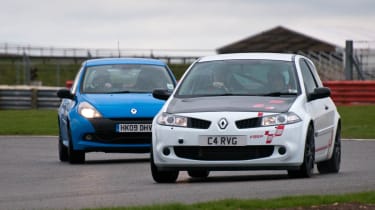 My new-found love for trackdays hasn’t made life easy for the Clio, so it was no shock that with 12,000 miles having passed under its wheels, it was in need of some TLC.

First up was a service at Renault Northampton, which cost a not inconsiderable £187.24. To my surprise, the Cup’s need for new brake pads wasn’t initially picked up. This has since been rectified, a full set plus labour costing a fairly steep £332.30.

The Clio’s old ContiSportContact 3 tyres have also been replaced – with a set of four new Dunlop Sport Maxx TTs (£394 all-in from Tyres Northampton). No sooner had they been fitted than I was on track again, at a Renaultsport day at Silverstone. Ninety-four laps later (yes, really), it was safe to say the new tyres were bedded in…

The Clio also helped me pass my ARDS racing licence test via some training with MSV at Snetterton, and will be out on track again at Spa on May 25. If you and your Renaultsport are attending, do say hello. And feel free to share your track experiences with me (stephend@evo.co.uk). I’d love to know how other people are getting on with their 200s, Cup or no Cup.