Is Renaultsport's Cup chassis an essential option? We compare the standard Clio 200 with our Cup long-termer 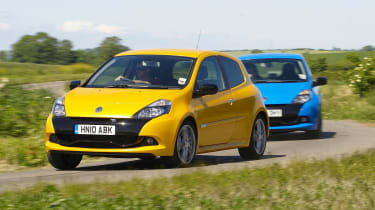 To Cup or not to Cup? Renaultsport offers its Clio with or without the hardcore chassis option fitted to our long-termer, so I booked in a standard Clio 200 for a 1000-mile comparison.  Let’s begin by getting (mildly) techy. The standard 200 has 15 per cent softer dampers than its 197 predecessor, while the 200 Cup’s items are 15 per cent stiffer than the 197 Cup’s. Compared to the standard 200, a 200 Cup boasts 27 per cent stiffer front springs, 30 per cent rear while the anti-roll bar is 10 per cent stiffer and the ride height 7mm lower. The steering rack ratio is 7.5 per cent quicker. That jumble of numbers translates into one rigid feeling hot hatch. While I’m a huge fan of the Cup’s sharp dynamics, there are some gnarly B-roads where it feels excessively hard, while passengers often grumble, even after a seemingly sedate urban trip. Does the standard 200 solve these woes? In short, yes. Differences are detectable from the get-go, some of the nastier potholes that surround Evo Towers devoured and a more refined and polished feel evident in town. In the Cup, you never forget you’re in a hot hatch, the jostling about through broken roundabouts and junctions reminding you of the more hardcore chassis beneath you. The standard car feels like a plush supermini whenever you’re just pottering about. Turn the wick up and the 200 impresses, too. Driving at seven tenths it’s a smoother car to attack twisty roads in than the Cup, its less edgy steering and superior bump absorption meaning you can string together corners with more confidence (and more comfort). Up your game further, though, and the Cup’s finer levels of grip communication and mid-corner interaction aren’t there, leaving you somewhat detached. It’s only by a sliver, admittedly, and only evident if you’ve driven a similar piece of road with a Cup chassis. But having covered big miles in my Clio Cup, it’s a sliver I would miss.  On track, it’s the same story. The standard car feels blunter, a less precise tool when it comes to nosing into corners and sticking to your lines. This may be the crux of the decision, for some - the difference between specifying a Cup chassis could hinge on whether the car will be used on track or not. If it will be, I’d advise ticking the option box. What if you’re not a track-goer? I’d be selfish (and risk the frequent wheel alignments that HK09 DHV has required) and still choose the Cup chassis. This saves £1000 if you can forego the cruise and climate niceties, or adds £400 to the cost of a 200 if you can’t. With a wife and kids in tow, however, my conscience would probably see me stay standard. But even then, the majority of the time I doubt I’d feel like I’d taken the soft option.