Winter weather is the enemy of a Renault Clio Williams, for a number of reasons 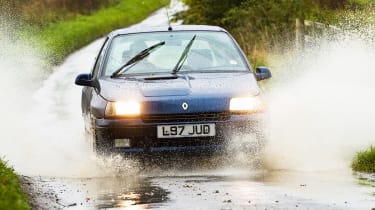 Old car ownership is proving to be an increasingly absorbing thing. Excusing conspicuous flaws as ‘character’ is a petrolhead trait that’s always grinded on me, yet the continual discovery of new rattles or imperfect components on the Williams is a perversely intriguing one.

They really do give the car an almost human touch: the air vent that’s always open, the irritating above-25mph rattle that appears when there’s no passenger, and conversely, the disquieting hum north of 3000rpm that’s only present when showing the car off to friends and family.

It all adds up to an experience more involving than that offered by my long-term Fiesta, which the Willy is drawing my attention away from a little too much at the moment.

Still, the impending winter weather should ensure the Renault stays tucked up in bed more frequently. While fairly stable (and good fun) in the wet, the lack of ABS and traction control is a minor weight on both my and co-owner Adam Shorrock’s shoulders, as is the thought of rain, snow and council salt and grit destroying the sweet condition of the Clio’s chassis and wheelarches.

A Waxoyl treatment beckons to help combat the latter, joining a job list that includes treating the paintwork’s scratches and chips, a refurb for the alloys and a stereo fitting – hopefully a simplistic, none-too-flash item that sits well with a ’90s dashboard.

Anyone with suggestions for the above – or fellow Williams owners wishing to share their experiences – email stephend@evo.co.uk