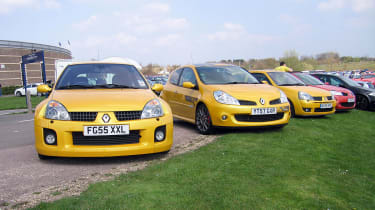 It was one of those brilliant Sunday mornings. The light was streaming through the window, the roads were empty, and there, sat outside my house, glowing a lush golden colour in the early morning sun, was my Clio V6. Everything about the situation said, ‘Go for a drive. And take the longer, twistier route.’ My destination? The Renaultsport National Meet at the Heritage Motor Centre in Warwickshire, 100 miles away.

So with the family sleeping I crept out of the house. One of my favourite things about the Clio is that it doesn’t fire up with a theatrical yelp. Indeed, my car – with its standard exhaust and air filter – is relatively quiet and restrained at low revs. Perfect for surreptitiously creeping out on Sunday mornings. Saying that, when cold it is recalcitrant to say the least – it’s even kangaroo’d a couple of times and I’ve not experienced that since my first Mini, with its slack throttle cable and mullered front subframe mounts. Anyone else with a Clio V6 experienced this? PM me via the community at evo.co.uk

However, the jerking doesn’t last long, and when the oils are warmed – after around 15 miles – it’s ready to play. Suffice to say the next 85 miles were some of the best I’ve ever driven in any car. The Clio V6 provides odd and often contradictory messages through the wheel. For instance, when the steering goes light it doesn’t mean the car is about to understeer into a barn – it’s just that with such a heavy engine behind you the front can feel like it is skimming over the surface when the road gets bumpy. A uniquely involving characteristic, once you’ve told your brain that a crash isn’t imminent.

And the Renaultsport National Meet? Excellent. I met some of the guys from v6clio.net, enjoyed some good conversation, wandered through the biggest gathering of Renaultsport cars in the UK and drove home basking in the warm glow you get when you’ve spent the day with like-minded individuals. Thanks all.