The Clio V6 sees a new pair of seats installed this month. Just how big an improvement are they? 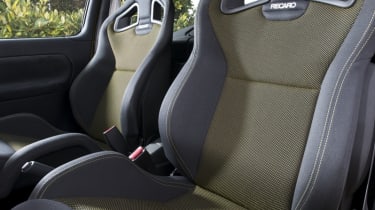 Driving my Clio V6 quickly on the original seats was much like sitting on a beanbag strapped to a bull. Too soft, too squishy, little lateral support and – crucially – too little feedback from the chassis.

Such is the knife-edge handling of the V6, you tend to analyse every message sent from the car to your backside or hands in acute detail. Interpreting the messages quickly and correctly could mean the difference between nailing an apex or sailing through a hedge. Backwards.

The soft and high-mounted seats dulled these messages. Fortunately for me, Renault offered a solution – a set of the Recaros available on the current Clio and Mégane Renaultsport. They also offered to fit them, although Mike Sewell, who oversaw the fitment, might have regretted taking on the task…

‘Not a simple job,’ he told me afterwards. ‘There are four bolts under the seat, but to get to them you have to remove the undertray.’ With the airbags switched off, Mike and his team had to reach over the 3.5in sills to set about removing the original seats. Detaching the headrests made them easier to extract, but it was still a squeeze.

Next job: partially strip down the old seats, remove the runners, re-fit to the new seats, then attempt to install them. ‘Again, the wide sills proved a problem,’ explained Mike, ‘as did the fixed headrests – it was a squeeze to get them in position!’ Mike’s team then addressed the problem of wiring the airbags in, as the Recaros link to the car with a single wire whereas the old seats used two. Eventually a combined plug was created and the airbags switched on.

Drawbacks? The seatbelt pretensioners are exposed between the seats, but I’ve resisted the option of having these disguised with a custom piece of trim (I think the extra trim would look even more out of place than the pretensioners). Also, try as they might, Mike’s team couldn’t get the seats any lower. However, first impressions render these drawbacks irrelevant. On my first drive with the Recaros I felt like I was being introduced to an entirely new, and hitherto hidden, chapter of feedback. More next month.