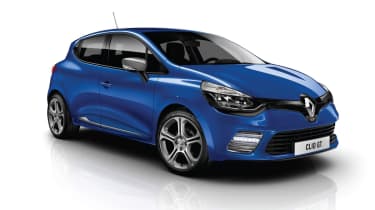 The Clio GT-Line is a new warm hatch aimed to sit between the standard Clio range and the Renaultsport 200 Turbo. It offers many of the flagship’s styling cues and equipment, but aims to appeal to a wider audience, with lower running costs thanks to an efficient direct-injection 1.2-litre power plant.

The GT-Line features the all-new turbocharged 1.2TCe 120 engine, mated to Renault’s EDC dual-clutch gearbox, like the version found in the full-fat 200. Making 120bhp and 140lb ft of torque, Renault claims 0-62mph in 9.9 seconds and a top speed of 121mph, comparable to its closest rivals the Mini Cooper and Citroen DS3 VTi 120.

However, it shades its rivals in terms of frugality – 54.3 mpg and 120g/km of CO2 on the combined cycle suggest much reduced running costs over its feistier sibling. Road tax is free for the first year and just £30 a year thereafter. An insurance rating of just 14E should also appeal to the younger driver.

Developed by Renaultsport, the chassis is doubtless a cracker. A Sport chassis is standard, including 40% stiffer dampers and specific bump stops. R.S. drive is an added bonus with two driving modes, Normal and Sport; the latter sharpens up the car’s responses by altering the ESC, steering feel and gearbox mapping.

The GT-Line’s styling sets it apart from lesser models with GT branding throughout. Additionally, 17-inch alloys are fitted, along with GT-specific bumpers, sills, diffuser and a rear lip spoiler. The cockpit is suitably driver-focused with Renaultsport seats, GT steering wheel and column-mounted paddles.