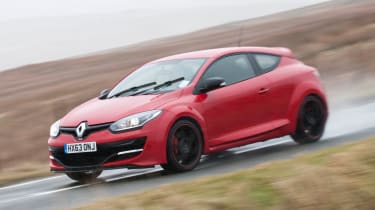 Renaultsport Megane battles SEAT Leon Cupra in our latest track battle. Two direct rivals, these two hot hatchbacks are the fastest offerings from both manufacturers, sharing near identical performance figures. The French car has been a longstanding favourite of ours, but the Leon Cupra is a new challenger that might just steal the crown on track.

The Renault Megane 265 is essentially based on a car that has been around for four years now, yet still it remains one of our all-time favourite drivers’ cars. Having recently undergone a facelift, the latest and most powerful version hasn’t lost the original car’s charm, keeping its playful chassis and pointy front end.

The Megane’s 261bhp and 256lb ft of torque 2-litre turbo four might be amongst the oldest and least powerful in its class, but with the 0-60 dash taking just 6sec and a top speed of 158mph, the £26,930 hot hatch still stands ground as one of the fastest cars you can buy in this price bracket.

And that’s before you consider the car’s on track handling, because what it might lack in power, it more than makes up for in fun. An accurate, direct nose steers a dynamic and playful rear, meaning despite being very much a front-wheel drive car, the Megane can be backed into corners without fuss. And it still has a manual six-speed ‘box to the delight of us keen drivers, making the Megane feel like an almost old school hot hatch offering.

A very new school offering that aims to challenge Renaultsport’s Megane is the SEAT Leon Cupra 280. Our DSG car, using a paddle operated semi-auto six-speed and Volkswagen’s VAQ Haldex-based active locking differential, gives the Spanish car possession of some of the latest in performance technology that should see it bring a seriously strong challenge to our old favourite.

To emphasise this, the Leon Cupra recently stole the Nurburgring front-wheel drive lap record from the Megane by a staggering nine seconds, dipping under the eight minute mark – a very serious time. But the jumps, cambers and winding straights of the ‘Green Hell’ are very different to the smooth, and wide corners of the Bedford Autodrome West Circuit, so the challenge is far from won. The Ring Cupra also featured some performance parts not currently available to buy.

The Cupra does however just edge ahead of the Megane in out-and-out sprinting performance, accelerating from 0-60 in just 5.7sec and then onto a limited top speed of 155mph. With a 2-litre turbo four producing 276bhp and 258lb ft of torque, the more expensive £28,530 hot hatch should have a straight-line advantage.

So, which is quicker? And which will you enjoy most on a trackday? The video above reveals all…