The Audi R8 Plus has a 322bhp advantage over the Renault Clio Cup racer - but it doesn't have slick tyres or such a lack of inertia. Super close track battle video here 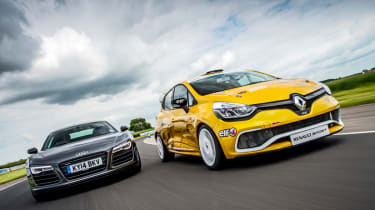 Audi R8 Plus vs Renault Clio Cup at Blyton Park. An unfair battle, surely, putting a 542bhp ten-cylinder super coupe against a supermini with a 1.6-litre engine?

Not so. This Clio is a stripped-bare racing version of the 200 Turbo. With a solitary racing seat and extensive roll-cage replacing all the interior trim, it’s a purposeful and noisy driving environment. The 1.6-litre four-cylinder turbocharged engine itself is essentially standard, save for a new exhaust and remap that takes peak power to 220bhp and torque to 199lb ft. The motor is built at Magny-Cours by Oreca, which then seals it to prevent further tweakery by teams in an effort to keep costs down and competition as close as possible.

Gone is the twin-clutch transmission from the road car, replaced by a purpose-built Sadev single-clutch sequential gearbox. It too is operated by paddles, but all similarities with the road car’s ’box end here. Likewise the Brembo brakes are pure race car, with 330mm front and 260mm rear discs clamped by motorsport calipers and pads. There’s no ABS or traction/stability control.

The driving position is low and rear-set, so once you’re pulled down tight by the racing harness you don’t have much of a view.

The steering is quick and light thanks to power assistance, while the gearbox punches up and down the ratios with an immediacy that gets your pulse racing. With temperature the brakes and slick Dunlop tyres bring the whole experience to life, as grip, traction and stopping power increase to levels you can only dream of in a road car on road tyres. To race amongst a grid of identical cars on the British Touring Car Championship support package must be a hoot, though you’ll need an R8-sized budget to do so.

What we want to know, though, is can a race-spec hot hatch hope to hang onto a car that fights in a ring with the Ferrari 458 and McLaren 650S? The video above should reveal all…