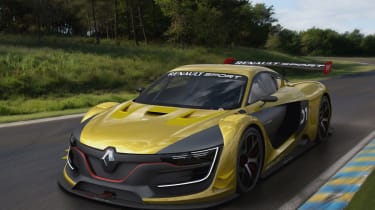 Renault has pulled the covers off its latest one-make racer, the R.S 01 at the Moscow motor show. The fully carbon fibre coupe features a 493bhp twin-turbocharged V6 engine, and is set to race in a new Renaultsport Trophy championship.

The engine is a 3.8-litre twin-turbo V6 unit, derived from the version used in the Nissan GT-R. Supplied by Nismo, the unit benefits from a dry sump lubrication system to cope with the rigours of racing  on track. The engine is mid-mounted, and hooked up to a Sadev seven-speed sequential transmission with steering wheel paddles. Performance is said to be somewhere between a GT3 and DTM car.

Built to conform to the strict 2014 LMP1 safety standards, the R.S 01 is built around a full carbon fibre monocoque, produced by Italian racing experts Dallara. The styling is clearly a development of the Renault DeZir concept from 2010. With a steel roll cage, and all of the crash structures and safety features in place, the car weighs in at 1100kg.

The braking system consists of 280mm carbon discs, with six-pot brake callipers and a Bosch ABS system. Double wishbone and pushrod suspension, with Ohlins racing dampers, ensures total control and adjustability. All cars in the series will be required to run on a set of specially formulated Michelin 18-inch racing tyres.

With the first season kicking off in 2015, up to 20 Pro-Am teams will be able to enter the series, with racing taking place at World Series by Renault at various European circuits.