Can Clio reclaim its crown? Updated with pricing and performance 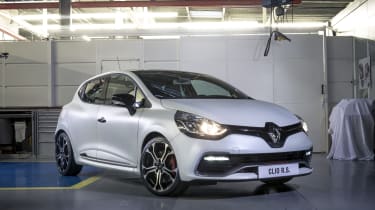 When it comes to hardcore hot hatches, Renaultsport has an enviable reputation built on a consistent ability to make cars that are brilliant to drive on road and track. So you can imagine our disappointment when the Clio 200 Turbo left us feeling flat. Trading the Phase 3 RS Clio’s focus on high-revving, hard-riding thrills for a softer and more mainstream approach, it lacked the energy, edge and effervescent character that had previously had us hooked. Stung by criticism from the UK press and similarly downbeat feedback from its more purist customers, Renaultsport has responded with this, the Clio 220 Trophy.

As its name suggests, an increase in power is central to the Trophy’s improvements, but a more muscular state of tune for the 1.6-litre turbocharged engine is just one piece of the puzzle. With a much more responsive DCT paddleshift transmission, a firmer, lower, sharper setup for the front-drive chassis and some cosmetic tweaks to distinguish it from its lesser siblings, the 220 Trophy is a comprehensive reinvention.

Ahead of its Geneva motor show debut, we visited Renaultsport’s HQ to have a close look at the car and to meet the engineers responsible for what we hope is a Clio worthy of the RS badge.

The headline gain of 20bhp – taking peak power up to 217bhp (220 PS) – might suggest a light ECU tickle from a remap, but there’s a lot more to the Trophy’s gains in output than mere software calibration changes. For starters there’s a new turbocharger. Retaining the same external housing, but featuring new internals, it responds faster and blows harder, spinning at 190,000rpm compared with 185,000rpm for the old turbo. 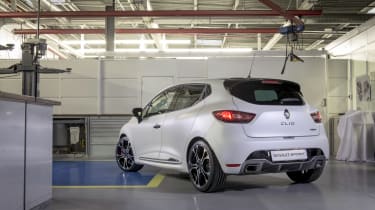 Much attention has also been paid to the intake and exhaust systems. The former features a bigger bore air intake pipe to flow more fresh air in, while the latter has a new free-flowing, big-bore flexible downpipe section and a combined two-stage catalytic converter, which replaces the old system’s pair of more restrictive separate catalysts.

The 20bhp increase is welcome, especially as it arrives just 50rpm further into the 1.6-litre M5Mt engine’s rev range (6050rpm), but the big news is the substantial gain in torque. Thanks to an overboost function within the engine mapping, up to 206lb ft is available in fourth and fifth gears between 2500 and 4000rpm, effectively putting a 14lb ft bulge in the otherwise plateau-like torque ‘curve’. When not overboosting, the engine delivers a solid, unwavering 192lb ft from 2000 to 5600rpm in all gears.

That compares with 177lb ft from 1750 to 5600rpm in the regular 200 Clio. Renaultsport has also upped the motor’s red line, from 6500 to 6800rpm (but only in the first three gears), which not only promises to make the Trophy more fun to wind through to the limiter, but also allows the twin-clutch transmission to deliver earlier downshifts.

To further enhance the Trophy’s sense of urgency, the throttle map has also been tweaked so that it now responds more sharply earlier in its travel. When fitted with the optional Renaultsport Monitor on-board telemetry system, the Trophy retains the 200 Turbo’s driver-selectable throttle maps, which offer everything from a super-progressive setting for driving on snow to an ultra-sharp map best suited to track driving.

The revised engine complies with Euro 6 emissions standards and the car’s CO2  output improves by 6g/km to 138g/km (largely thanks to stop/start when driven in non-Sport modes), helping to drop the 220 Trophy down a Vehicle Excise Duty (VED) band in the UK.

If there was one area of the RS Clio that desperately needed improving, it was the EDC (Efficient Dual Clutch) paddleshift transmission. Thankfully it sounds like the Trophy will come much closer to delivering on its original promise of a hot hatch with a supercar-like gearshift. 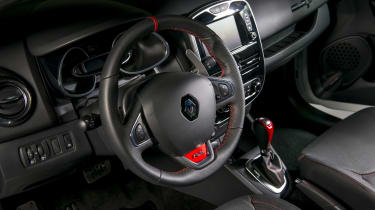 Starting with the paddles themselves, the travel has been reduced by a third so there’s less delay between starting to pull the lever for a gear and the car responding accordingly. The gearbox ECU has also been given a wake-up call, resulting in gearshifts being 40 per cent faster in Normal and Sport modes and 50 per cent faster in Race. That basically means Normal in the 220 Trophy is the equivalent of Race mode in the regular 200.

A constant frustration on track and a regular source of annoyance during fast road driving, the transmission’s reluctance to give you downshifts when braking hard into a corner has now been addressed with recalibrated software. Renaultsport admits it was conservative with the safety margins of the downshift strategies on the 200, so being a bit bolder with these, together with exploiting the 500rpm gain in maximum engine speed, should put an end to those fruitless tugs on the left-hand paddle.