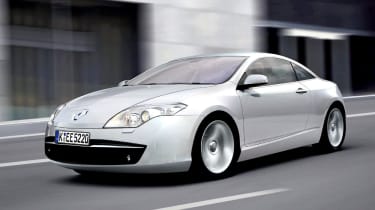 Not only does Renault currently develop a three-box saloon variant of the still-new Laguna, the French maker will also turn the Laguna Coupe concept car shown at the Frankfurt Show last year into a production model.

While the show car was a real stunner, with the real machine Renault seems to put greater emphasis on rear passenger space and cargo capacity to put it in line with the Mercedes CLS and all-new Volkswagen Passat CC, though two doors will have to do at the French car. We expect the Laguna Coupe will be offered with the existing range of engines. Rumours suggest a new 3.0-litre V6 dCi engine might be introduced together with the car, delivering between 230 and 250 bhp. We expect the car to enter the European market in 2009.