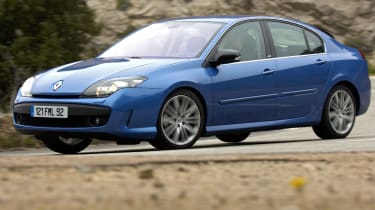 One thing the Renault Laguna had never been until its latest incarnation was surprising. The fact that it was exactly stylish enough to snag the odd glance without turning heads somehow told you everything you needed to know about how it would drive. Quite pleasantly, thanks. And thank you for asking. If it had been a hi-fi, its sound would have been described as ‘polite’, and it would have been able to do justice to just one band: The Corrs.

At least the new Laguna, launched last summer, disowned its tepid, timid past in two important respects: on the outside, vaguely pretty was replaced with startlingly, head-swivellingly odd (for the five-door hatch, anyway) and build quality took a giant leap of lunar landing proportions. The long overdue transformation ushered in additional benefits: a classy, well screwed together interior, extra-roomy accommodation, great (even better than before) ride comfort and truly exceptional refinement. The idea was to bury the ropey old reputation and establish a smart, premium-standard new one – undoubtedly a good move in a sector increasingly obsessed with design and quality. Trouble was, the best of the design- and quality-obsessed competition – excluding the usual German suspects, let’s call it the Ford Mondeo and Mazda 6 – also had a thing about crisp, sporty handling, something the Laguna did not. Still a three star car, then.

And had Renault elected to launch just another routine GT range-topper to round off the hatch and estate lines, that’s how it likely would have remained. But what’s this coming over the hill? The return, after many years in the wilderness, of four-wheel steering. As surprises go, it’s a good one. 4WS, like Betamax videos and the Digital Audio Tape, is one of those technical innovations that seemed promising but never caught on. It enjoyed a brief period in the sun in the ’80s with the Honda Prelude and Nissan Skyline GT-R R32, but then disappeared, filed under ‘unnecessary complication’ as a raft of new traction and stability systems grabbed the initiative.

Its comeback on the fastest Laguna is in no small way connected to the strategic alliance between Renault and Nissan – the Nissan-owned Aisin company supplied the 4WS hardware for the GT, just as it did for the Skyline. The basics haven’t changed much. Up to 38mph the rear wheels turn in the opposite direction to those at the front, decreasing the turning circle by 10 per cent, making it the same as a Clio’s. Above 38mph the rear wheels turn in the same direction as the fronts, improving stability and grip by counteracting the centrifugal forces that act on the rear of the car during high-speed cornering. The difference between then and now is the electronic implementation of the system, jointly undertaken by Renault and Renault Sport Technologies, that adds a new layer of safety benefits (particularly when braking in tricky conditions and taking emergency high-speed avoidance action) to what Renault claims to be the traditional 4WS strengths of enhanced low-speed manoeuvrability, sharper helm responses and greater agility.

On paper, adopting 4WS looks like something of a masterstroke, allowing the Laguna to retain its supple, cosseting ride while endowing the chassis with the precision and resolve to take on the acknowledged drivers’ cars in the class, perhaps most notably the Mondeo. On the road, it’s every bit as good as that, maybe even better. Despite the firmer springs and dampers, the 203bhp 2.0T hatch you see here (there’s also a 178bhp 2-litre turbodiesel) rides even more smoothly than the 2WS car on hand for comparison, yet also makes it feel astonishingly inert and unresponsive on the more challenging sections of Corsica’s snaking tarmac. Turn-in, precision, grip and stability are of a completely different order. And there’s much less elbow work required at the helm. Don’t think, with just 2.2 turns between locks, that the steering is nervous or edgy; the GT is just one of those cars that always seems to be in the right place on the road rather than having to be consciously steered there. It’s exact without being exacting, flowing through combinations of bends, feeling simultaneously tidy and malleable. Fine gearchange and brakes, too.

What it isn’t is very sporty. ‘Throttle adjustability’ in the usual sense doesn’t exist. There never seems to be the faintest possibility of the the tail moving a centimetre out of line. Instead, understeer is doggedly resisted and, when it eventually arrives, lifting off merely restores the intended line. And the unambiguously macho cabin decor – flat-bottomed steering wheel, drilled pedal, semi-bucket seats – is somewhat at odds with the whispering, nondescript engine note and torquey but undramatic performance. Then again, as a comfortable, low-stress, high-ability means of dispatching distance, ‘GT’ isn’t so very far from the mark. 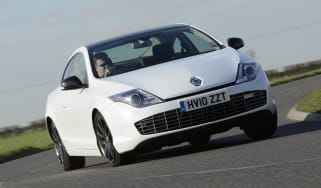 It's a rare sight, but does the Renault Laguna Coupe Monaco GP deserve to be seen more?
Visit/renault/laguna/6672/renault-laguna-coupe 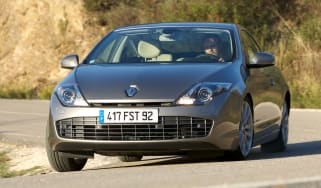 It's better looking than the hatchback, but is it a better drive too?
Visit/renault/laguna/9470/renault-laguna-coupe 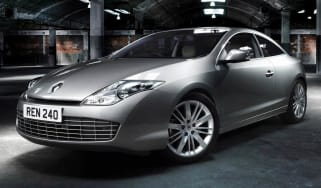 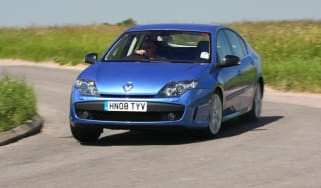 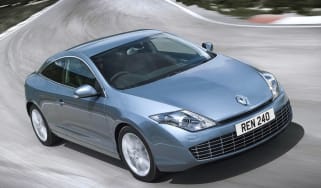 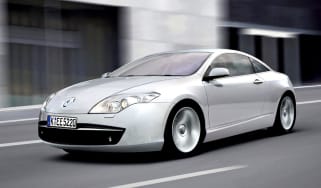