Unveiled at the Cannes Film Festival, then later at Monaco, Renault picked Europe's busiest weekend for the Coupe's first airing 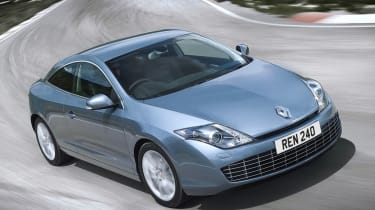 Lewis Hamilton and his F1 colleagues weren’t the only ones darting around Monaco's GP circuit last weekend. Renault chose the occasion to lap the circuit with two Laguna Coupes.

Renault’s newcomer shakes off the blandness of previous offerings and is a huge a tribute to the stylists.

The real trickery, however, lies under the skin. As with the Laguna GT we tested recently (evo issue 118), the coupe’s equipped with four-wheel-steering, a benefit of the company’s technical alliance with Nissan. 4WS affords the car with a turning circle of a supermini, plus improved agility and stability at low and high speeds. At low speeds the rear wheels turn in the opposite direction to the front, improving the car's turning circle, aiding manoeuvres, etc. At higher speeds (38mph on the GT) the rears move in the same direction, assisting high speed agility, control and precision, particularly during emergency manoeuvres. We rated it very highly on the Laguna GT.

The car will be shown in greater detail at the Paris Motor Show in October. If you can’t wait, a microsite is up and running here