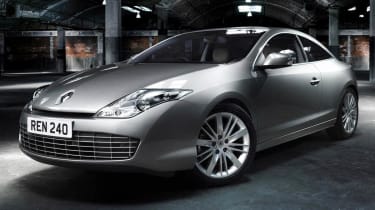 Renault is gunning for the two-door BMW 3-series with this, the Laguna Coupe. It faces a stern test - the Bavarian sold over 25,000 units in Europe during the first half of 2008, while the cheaper Peugeot 407 Coupe shifted a mere 14 per cent of that.

The Laguna is hoping to fare a bit better, with Aston Martin inspired styling (note the DB9-like rear lights and Vanquish-esque grille) and 4Control four-wheel steering on the higher-spec GT versions.

You can place an order from mid-November, with the cars hitting dealerships at the very start of 2009 - apart from the V6 diesel, which arrives some time early in the year. Renault is boasting value compared to the market-leading 3-series coupe, with the £22,345 Laguna 2.0 turbo petrol undercutting a comparable 325i by almost £7k.

You can find out if the Laguna lives up to its looks in next month's evo Magazine, which goes on sale on November 12.