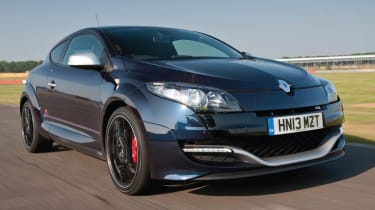 Renault has unveiled a limited edition Megane hot hatch. The Megane Renaultsport Red Bull Racing RB8 has one of the longest and most alliterative car names we’ve yet seen, but its philosophy is a little simpler.

The Megane 265 Cup – our current favourite hot hatch – has been given a lick of Red Bull branding, unsubtly reminding buyers that Renault provides the engines for Sebastian Vettel and Mark Webber’s Formula 1 cars.

Its 261bhp 2-litre turbo petrol engine remains unchanged, hence the Megane’s 6.0sec 0-60 time and 158mph top speed ought to remain, too. The changes centre around the ‘Twilight Blue and Platinum’ colour scheme, updated Renaultsport Monitor telemetry, Tom Tom Live satnav and the Bridgestone Potenza RE050A tyres seen on the limited Megane 265 Trophy. The Megane’s harder Cup chassis is also standard, bringing with it stiffer springs and dampers than normal as well as a limited-slip differential, which contributes markedly to the hatch’s class-leading dynamics.

Just 30 Megane Renaultsport Red Bull Racing RB8s will make it to the UK, priced at £28,245. This represents a rise of £2700 over a basic Megane 265 Cup, though the premium shrinks to £500 when you consider the seats and satnav are standard-fit.

The Megane Red Bull marks the F1 team’s 2012 constructors’ world title, and is reminiscent of the 2006 Megane R26, released when Renault itself picked up the trophy.