A Renaultsport makeover for the current Megane Coupe. Expect to see it in the UK in November 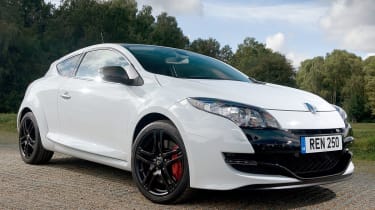 As its name suggests, the Megane 250 will produce 250ps (247bhp) thanks to a revised version of the 2-litre turbocharged engine we’ve seen in the previous generation R26. Strong performance is further promised by a generous spread of torque – 184lb ft is available from just 3000rpm. The new car features ‘PerfoHub’, the diff and suspension first seen on the 2004 Renaultsport Megane. The Coupe’s already sporting stance is enhanced by the blade nose design which apes that of the existing Renaultsport Clio, while extended sills, a rear diffuser and a centrally mounted exhaust pipe leave no doubts as the car’s intent. It’s loaded with toys including a monitor in the centre of the dash that gives readouts for lateral forces, 0-60mph times, a gearchange warning and even a calibration display of the throttle pedal mapping. Further details, including pricing, will emerge closer to the launch date.