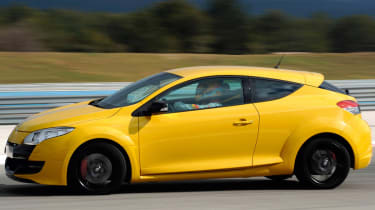 Another week means another Renaultsport hot hatch, and this one’s a biggie. Following news of the budget Twingo 133 Cup comes the all-new RS Mégane 250.

The car was unveiled back in March at the Geneva motor show, and we’ve had an exclusive photo shoot of it, but Renault has waited until now to release firm details and prices.

And the good news is - like the Renaultsport Clio and Twingo - the Cup package kicks off the range and you can pick yourself up a more hardcore car on a smaller budget.

£21,995 buys you an entry-level Mégane 250 Cup, which gets a limited-slip diff and stiffer anti-roll bar, springs and dampers compared to the standard 250 as well as grooved brake discs, red Brembo calipers and some rather smart 18in satin black alloys wrapped in 235/40 Michelin Pilot Sport 2 rubber.

The diff is the same one that has a starring role on the Mégane R26.R, and mated to the new car’s 247bhp turbocharged 2-litre, should be a pretty handy riposte to the Ford Focus RS that dominates the large hot hatch class at the moment. Renault's PerfoHub acts on the front suspension's steering axis, too, to help eliminate torque-steer and improve traction as brakes are applied into and power applied out of bends. It's a trick system that - depending on who you talk to - is the forerunner to Ford's RevoKnuckle.

Despite its hardcore nature, cruise control, eight airbags, Bluetooth and parking sensors are all standard on the Cup. For those who need more luxury, though, an extra grand will get you a Renaultsport Mégane 250 with a softer chassis set-up but oodles of equipment, with heated leather seats, auto lights and wipers and dual-zone climate control among the highlights.

The Cup chassis tweaks can be added to the standard car as part of a £1950 package that includes a pair of RS Recaros, too. That’s part of a lengthy options list that includes daytime LED lights, various wheel choices and a host of colours. Perhaps the star of the options boxes is Renaultsport Monitor, which displays a number of the car's variables (including a g-force meter) and includes a lap timer and acceleration recorder, while you can even adjust the trottle mapping with it. We like.

The order books open on November 1, with deliveries to UK customers in January 2010. Keep your eyes on evo.co.uk for a drive of the new Renaultsport Mégane - fingers crossed it can live up to its now legendary forebear, the Mégane R26.R. View a video of that taking on Corsica's best roads here.