Not as radical as the concept, but still a worthy competitor to the forthcoming Scirocco 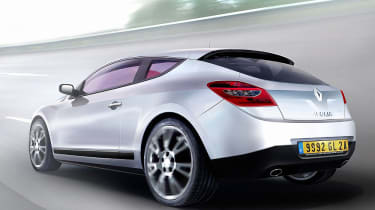 It won’t be as radical as the gull-winged Mégane Coupé Concept shown at the Geneva motor show earlier this year, but the production version Renault Megane Coupe will still be a pretty exiting car and a worthy competitor to the up-coming Volkswagen Scirocco. Still heavily disguised in this picture taken at the French firm’s headquarter, the car looks mouth-watering with very short front and rear overhangs, a flat windshield and a sloping roof line.

The concept car was equipped with a turbocharged 2.0-litre four-cylinder petrol engine – and we certainly hope the real machine will get a similarly potent powerplant when the wraps come off in late 2009.