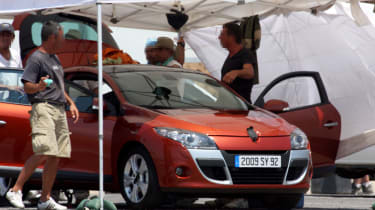 Well, we’re far away from France and unlike what is implied in the newspapers regarding a journalist at Auto Plus, we didn’t have any inside information – but we did stumble upon a video shoot in the United States involving the next Megane. And although we have a variety of people attempting to cover the vehicle, we managed to get exclusive pictures of the next Megane – showroom ready!

The new Renault Megane III will be launched at the Paris Motor Show later this year and, as you can see, will be a revolution in car design.

The new Megane will be a small family car offered in 3- and 5-door hatchback guise, with other versions (sedan, coupe, convertible, station wagon and probably crossover body-styles) to follow. Built on the same platform as the Nissan Qashqai, this European Renault will engage in a formidable fight with the Peugeot 308, Fiat Bravo and VW Golf VI, and will obviously be much more than just a mature evolution of the current Megane.