Video and pictures of the Renault TwinRun, a mid-engine V6 hot hatch concept that previews a new Twingo 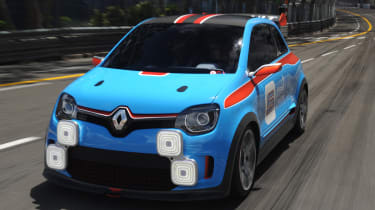 8
Renault unveiled its TwinRun hot hatch concept at the Monaco Grand Prix. With a mid-mounted 3.5-litre V6 engine sending 316bhp to the rear wheels, it’s essentially a racing car wearing a skin that drops clear hints at how the next generation Twingo will look. Released in 2014, the new car won’t get such a bombastic powerplant on its options list – and it’s set to be five-door only – but it will resemble this bold little concept by up to 70 per cent, we’re told.

The mk3 Twingo will be twinned with the new Smart car, and will share its rear-engine, rear-wheel-drive setup. ‘With the new Twingo we’re lucky to be starting with a blank sheet of paper. New platform, new layout, plenty of opportunity to reinvent the small car’ said Renault design chief Laurens van den Acker.

Its styling is inspired by the Renault 5, although van den Acker’s team had originally tried to recreate the original early 1990s Twingo. ‘I got my design team to do a new Twingo and one of them didn’t listen to me at all and showed a new Renault 5, and that’s the one we ended up picking! We had to go to a silhouette with a nose for pedestrian safety’.

The TwinRun was flanked by a Renault 5 Turbo and phase 2 Clio V6 as it debuted around the Monaco GP circuit on the Friday of race weekend, with Caterham F1 driver Charles Pic in the Clio and rally legend Jean Ragnotti driving the 5.

The TwinRun was driven by Renault chief Carlos Tavares. ‘The short wheelbase makes it extremely lively, it feels more like a rally car. It has been tuned for Jean Ragnotti!’ he exclaimed.