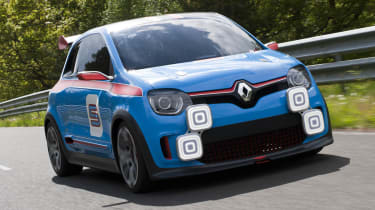 Renault has previewed the next Twingo with a wild concept car. The TwinRun is the sportier sibling to the Twin’Z concept, and it sees Renault revisiting its wild hot hatch back catalogue.

The TwinRun drives its rear wheels with a mid-mounted V6 engine. It’s the 3.5-litre unit used in the Megane Trophy race car as well as the Nissan 350Z, here producing 316bhp at 6800rpm and 280lb ft at 4850rpm. It’s linked to a six-speed sequential gearbox and whisks the TwinRun to 62mph in 4.5sec, while the top speed is 155mph.

There’s a tubular steel chassis and glass-polyester composite bodywork, while the front blade, roof and wheel arches are constructed from carbonfibre. Weight is kept down to 950kg, endowing the TwinRun with a 338bhp/ton power-to-weight ratio, more than a Mercedes SLS AMG. Its weight distribution is split 43/57 front/rear.

The TwinRun is designed to handle with the aplomb of a racing car, with Ohlins suspension, a limited-slip differential and a honed aerodynamic set-up. Jean Ragnotti – he of heroic Renault 5 Turbo-driving fame – was involved in the TwinRun’s fine-tuning, and is pretty pleased with the end product, describing it as ‘particularly efficient and easy to drive, unlike the R5, which required more technique’. And he should know.

Its wild looks are clearly inspired by Ragnotti’s blue and red Maxi 5 Turbo, its side profile, square headlights and mock rally spotlight LEDs unashamedly reminiscent of the car that defines Renault’s rallying heyday. The TwinRun’s number 5 stickers are another unsubtle nod to the car which joined it on track (alongside a Clio V6) as it debuted in the lead up to this weekend’s Monaco Grand Prix.

Any excitement for a modern day, 300bhp-plus hooligan is probably best tempered, though this concept is the clearest hint yet that the next Twingo –which will be rear-engined and rear-drive, like the Smart it will platform share with – will get a Renaultsport performance variant. Keep those fingers crossed…