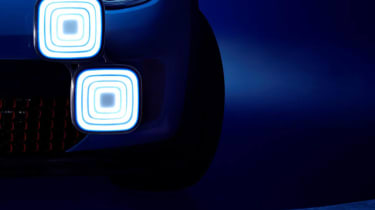 Renault has teased a new hot hatch concept. Rumoured to be called the TwinRun, and with these details looking very much like those of the car spied in the video below, it could be a modern-day equivalent of the much-loved Renault 5 Turbo. It's even driving with one in the spy pictures, right.

Part of the lead-up to the release of the third-generation Twingo, it takes the French firm’s next city car in a different direction to the electric Twin’Z, but is likely to keep its rear-powerplant/rear-drive layout, replacing its motor with an internal combustion engine. The new Twingo will be twinned with the next Smart city car, explaining its 180-degree switch in layout over the current car.

The video shows the TwinRun exhibiting a fairly raucous soundtrack, suggesting a highly tuned four-cylinder or even a V6 engine sitting at the back of the wee concept. There’s certainly enough power to overwhelm the rear wheels on a whim at the end of the clip. A production version of this car would be unlikely, but it’s good to see there’s a sense of fun and dynamism about the next Twingo and that Renault is taking the petrolhead public’s appetite for madcap hot hatches seriously.

The concept will be unveiled beyond these barely suggestive teaser images at the 2013 Monaco Grand Prix weekend on May 24, a year after the Alpine A110-50 concept debuted in the same location. The excellently silly Renault Twizy F1 is also set to be in attendance, and both will be at July's Goodwood Festival of Speed too. If it’s jaw-dropping concepts you crave, the French are on a roll…