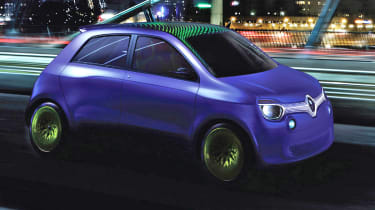 Renault has previewed a new city car – thought to be its Twingo replacement –with its new Twin’Z concept. It’s a five-door, all-electric model with the motor positioned at the rear, driving the back axle only. The Twin’Z’s bold lines – which combine clever LED technology, the French company’s current design language and the simplistic lines of the Renault 5 – were penned by British designer Ross Lovegrove. The concept’s rear-mounted electric motor produces 67bhp and 167lb ft of torque. It can whisk the Twin’Z to a modest 81mph, while its range-to-empty from a full charge is rated at 100 miles. Its four lithium ion battery packs are packed beneath the floor, aiding weight distribution and centre of gravity.  The 18in wheels are suspended on MacPherson struts front, double wishbones rear, with adjustable Ohlins dampers. Carbonfibre bodywork aids a 980kg kerbweight; impressive for an electric car, though this concept’s interior is unashamedly minimalist. When the new Twingo launches in 2013, more mainstream appeal will come from petrol versions. These are also set to be rear-engined and rear-driven, with development twinned with the next version of the Smart city car.