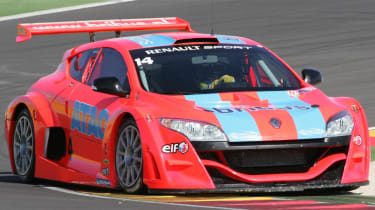 The winner of the 2009 Renault Clio Cup drivers’ title has been out testing in the company’s new Megane Trophy racer.

Phil Glew wrapped up the Clio Cup – a British Touring Cars support championship – in September with three rounds to spare, with his prize being a test in the striking new racing car based on the latest Megane mega hatch.

He did rather well, too, eclipsing fellow Clio Cup champions from across Europe by setting the day’s quickest time at the Motorland Aragon circuit in Spain.

‘The team have also been impressed by my performance and I have to say a move into the Eurocup Megane Trophy championship is something I would definitely consider!

‘My immediate plans though still centre on competing in the BTCC next season. I’m still in talks with my sponsors but a move looks increasingly likely and I plan to start testing with a number of teams very soon.’

Click here to peruse a gallery of Renaultsport Megane pictures