The hottest Clio has evolved again, and been transformed into a real junior road racer... 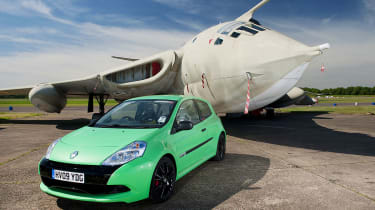 Evolution, as Charles Darwin once suggested, is a wondrous thing. Obviously we agree. And so, quite clearly, does Renault. The French car maker’s Renaultsport division made a dazzling case for accelerated adaptation with the previous-generation Clio, taking it all the way from fun (Clio 172) to formidable (Clio 182 Trophy) in the space of a few years and proving that a talented road-runner could evolve into a car that regarded any convenient racetrack as a natural habitat.

There was never any doubt that when the current up-tempo Clio was launched at the 2006 Geneva Show it would be the recipient of a similar fast-track-to-a-fast-track programme.  Some of us felt that the process couldn’t start soon enough. The Clio Renaultsport 197 clearly had star quality and – slightly slow, overlight steering aside – a peach of a chassis, but it was a lot heavier than the final iteration of its predecessor and, although the ‘197’ part of its name sounded impressive (its metric PS power output, or 194bhp), it seldom felt it, the peaky normally aspirated motor lacking the low and mid-range punch not just of turbo rivals like the Mini Cooper S and Vauxhall Corsa VXR but also the lusty old Clio 182.

A little patience, Renault assured us, would be well rewarded – and witnessing the way the Mégane was being developed into the greatest hot hatch the world had ever seen, we had little reason to doubt it. Things started moving in the right direction with the 500-off 197 Renault F1 Team R27 a year later which had lowered, stiffened suspension (the first mention of the ‘Cup’ chassis) but more kit too, so no progress on the weight versus torque-lite engine front.

The 197 Cup proper came at the end of the year and ticked the more familiar lighter/sharper/cheaper boxes. The chassis was carried over from the R27 but numerous minuses in the kit column saved a useful few pounds on the scales as well as slicing 1000 from the price.

But all that can now be filed under ‘tinkering’. Although bundled with a mid-life facelift for the Clio range, the 200 Cup is by far Renaultsport’s most serious attempt to address the early criticisms levelled at the 197 and move the hottest Clio into the zone that made the more heavily evolved editions of the previous- generation Clio so magical. First, the engine gains a little more pep and driveability. As before, the clue is in the name: 200 PS equals 197bhp. All right, hardly a call for blood pressure medication, especially as peak torque remains unchanged at 159lb ft. But both output peaks now sit 150rpm lower in the rev-range at 7100 and 5400rpm respectively, the result of a new cylinder head, revised variable valve timing and a new ECU. The effect on the torque curve is 20 per cent more twist at lower revs, designed to be felt most noticeably below 3000rpm, and a slight improvement in mpg and emissions. Shorter first, second and third gears also contribute to the wake-up call.

Predictably the new version of the Cup chassis – available as a £400 option on the regular, more plushly equipped and softly suspended (even than the 197) 200 – is the most extreme yet with ‘double-effect’ hydraulic dampers that are claimed to give a comfortable motorway ride, despite being 15 per cent stiffer than the old 197 Cup’s, and a 7.5 per cent quicker steering rack. The Cup chassis also has stiffer springs than the standard 200: uprated by 27 per cent at the front and 30 per cent at the rear. In danger of being lost in the small print, but arguably the most important change of all, is the adoption of the torque-steer-killing ‘independent steering axis’ front suspension geometry used to such stunning effect on the Renaultsport Méganes for a while now. In conjunction with the uprated torsion beam rear axle, it’s also said to give greater precision on turn-in and, from our experience with the Mégane R26.R, that’s exactly what we’d expect.

At 1204kg, the 200 Cup is also a tidy 36 kilos lighter than the 200, though where some of the savings have been made is more questionable. Air-con is easy to say quickly but hard to forget on a hot day (if the perspiration is getting in your eyes it’s a £550 option) and the deletion of any form of steering wheel adjustment seems perverse, especially if you’ve ordered the excellent optional (£850) lightweight Recaros and imagine tailoring yourself the optimum, maximum-attack trackday driving position. In reality, the seats are superb but the driving position a little too sit-up-and-beg.

The exterior of our test car, with its almost alarmingly garish Alien Green paintwork, is as subtle as a poke in the eye. Handsome alloys, though, and better still they’re shod with grippy 215/45 R17 Conti Sport Contact 3s.

So, a transformation? Compared with the original 197, yes – both subjectively and, on Bedford’s West Circuit, against the clock. Bottom line first. From rest the 200 Cup hits 60mph in 6.6sec and 100mph in 16.7sec – virtually identical figures to those returned by the Mini Cooper S. Hauling from low speeds in tall gears, the turbocharged Mini still murders it, but the deficit accelerating out of a hairpin in second is now much less pronounced. You still have to work the Renault hard to get anything like its best game, but its precise, short-throw gearshift is a willing partner and, flat out, there’s nothing in it.

More tellingly, though, the 200 Cup feels much more alert and urgent than the 197, stepping off the line with something approaching genuine brio and responding to small throttle inputs much more eagerly. The heightened verve gets a psychological shoulder rub from the more resonant exhaust note (no accident, it was tuned by Renaultsport) and is bolstered by a big reduction in the low-rev torpidity suffered by the 197. Another neat touch is the audible gearshift prompt that beeps just before the rev-counter needle hits the red line and allows you to keep your eyes glued to the road (or track) while avoiding a time-sapping brush with the rev-limiter. Seems trivial, but if you’re on it you’re on it.

And, in the 200 Cup, the temptation is ever present – not because of the engine alone (improved though it is) but because of the workload it gives what should now be regarded as a simply sublime chassis. All right, the ride is very firm, but in a good way: no harshness or jarring but an almost Elise-like poise that combines extremely precise control with a nuggety suppleness. Just as with the Mégane R26.R, it feels special within the first few hundred metres.

Although noticeably quicker than before, the steering avoids nerviness and simply feels more accurate. It also seems to have gained a little more weight and feel. The Clio is quick to change direction but it doesn’t turn in with the edgy zeal of a Cooper S, doesn’t feel quite as playful and keen to please. That said, its calmer dynamic demeanour comes into its own when the road starts asking questions that would cool the pace of lesser hot hatches. The 200 Cup remains steadfastly unfazed, continuing to cover the ground at an undiminished lick while maintaining a beautifully judged balance between sheer speed across the ground and throttle-induced entertainment. It has a lithe, sinewy athleticism that manages to carry seemingly implausible speed into and out of corners without wasting energy, while the Brembo stoppers are among the very best fitted to any hot hatch, R26.R and Focus RS included, not just for their power and firm pedal feel but also an absolute refusal to fade. Point is, if you want to play games with the throttle, the Cup will oblige with just the right degree of rear-end mobility. Classy, not crass.

Admittedly, if you stand on the throttle early exiting a tight roundabout, the inside wheel will scrabble away drive. It’s no R26.R in that respect (no trick diff) but in virtually every other it can be regarded as a worthy junior. Renaultsport has come good on the promise and delivered the car we dared hope the 197 might become. And we’ll back that statement up with one final, remarkable statistic. The Clio 200 Cup lapped the West Circuit in 1.32.0, 2.2 seconds faster than the 197 Cup did last summer. But then that’s evolution for you.