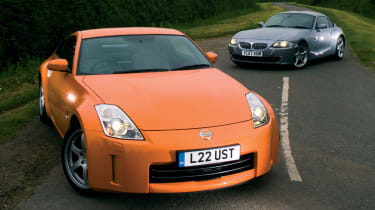 You’ve probably made your mind up already. That’s the thing about coupes – you’re sold on the looks. Some will see the crouching, long-nosed BMW Z4 Coupe as the epitome of a modern, classically proportioned coupe. Others will regard it as old-fashioned and be drawn to the chunkier, more modern Nissan 350Z with its embedded details. And you know what? A short test drive in either isn’t going to change your mind.

Four years after its launch here in the UK, the 350Z has had its first major overhaul. Previously there has been some tinkering around the edges, resulting in the V6 delivering a little more power to a subtly but usefully reworked chassis. Relatively speaking, the changes for ’07 are positively seismic. The original 3.5-litre V6 has been re-engineered and is now 80 per cent new. It sits slightly taller, too, hence the discreet bonnet bulge. That’ll have ’em beating down showroom doors…

There was little wrong with the 350Z’s looks, though, and the new engine revs to a heady 7500rpm and produces a cool 309bhp, up from 296bhp. Sports coupes with this level of grunt should cost considerably more than the £26,795 for the basic Z. Hell, even similarly potent Japanese turbo nutter rally saloons cost more.

The Z4 3.0si looks pricey, then. At £31,820 it costs £5K more, while its 3-litre straight-six produces 261bhp, almost 50bhp less. Ah yes, but what a wonderfully refined and responsive engine it is, and what a beautifully polished experience the BMW delivers. If you’re a sucker for its styling, you’re going to be putty in the hands of the Z4 on the test drive. Every control seems to be responsive yet damped to take any jerkiness out of your inputs. The clutch action, the engine’s low-speed temperament and the brake feel are all superb and highly flattering. Add in nicely judged steering weight, a wristy, direct gearshift and strong, silky power from low down, and the 3-litre Z4 is a very desirable car.

In isolation the Nissan is a fine car too, tactile and pleasingly organic, but the BMW manages to make it feel a little ordinary. The 350Z is slightly bigger inside and out, and as a consequence feels less intimate and cocooning, while its feelsome controls are a fraction less refined. The Zed is no longer a hefty, physical car to drive, though; the process of reducing the weight of the clutch, gearshift and steering that started with the ’06 model has continued. Indeed, at town speeds the Nissan’s variable-weight steering is lighter than the BMW’s, a sensation that seems enhanced by the former’s thin wheel rim.

As with the previous version of the V6, at idle the fat tailpipes spew an appealingly bassy rumble with a slightly fluty burr. Although mid-range urge seems similarly strong, the extended reach and vigour of the new unit are a great improvement. It feels good for every last one of its 309bhp. The classy-sounding BMW isn’t left gasping, though. At 1395kg it’s 137kg lighter, and while the 350Z’s gearing seems rather long – third goes to 100mph – the Z4’s is usefully short. Second just fails to reach 60mph, which might show up when we fit the test gear but makes no odds on the road. The Nissan has the edge though, as long as you’re prepared to extend its grittier-sounding six.

The 350Z’s steering weight may have been reduced but the responses of its chassis remain as before, which is a good thing. Jink into a turn and there’s just a hint of hesitation before the nose tucks in, as if there’s a chunk of inertia to be overcome, but once it’s turning, the nose grips strongly and the tail follows obediently, and when you pick up the power the Zed takes on a satisfying poise and digs for grip. Gas it too hard, too early and the ESP cuts in abruptly. Switch it out and, with well-timed provocation, the tail slips gently wide, allowing plenty of time to apply corrective lock, the chassis still composed so that gathering up the slide is quite easy.

Over the same smooth roads the Z4 feels quite different. This example sports the optional 18in wheels with 225/40 front tyres and 255/35 rears (the standard 17s are fitted with 225/45s all round). It rides with a little more suppleness than the 350Z and hunkers down more on its rear springs under power, while the feel through its fat, sculpted rim seems somehow less real. That said, turn-in is more decisive, more instantaneous, and grip is equally strong.

Thanks to DSC+ (Dynamic Stability Control) there are more opportunities to tailor your exit strategy. With the system fully active the Z4 will resist slip and hold the steered line with remarkably subtle interventions, an effect that’s especially impressive in the wet. Press the button marked DTC (Dynamic Traction Control) and you can play more, using the power to steer the tail whilst retaining the stability control safety- net in off-power scenarios.

Whatever mode you choose, when you pick up the throttle the Z4 isn’t nearly as communicative and composed as the 350Z. It actually feels quite odd the first time you get hard on the power mid-corner and the nose lifts and the tail squats. You’re expecting the feel from the rear to increase as the cornering load ramps up, but instead it evaporates so that you’re not sure if the rear tyres are slipping or not. Disabling DTC shows they’re mostly well hooked up despite the absence of a limited-slip differential, and it takes a good deal of provocation to get the tail out of line, but the lack of feel is quite disconcerting.

Compared with the Z4, the 350Z transmits more road noise through to the cabin, so you’re more aware of surface changes. But the Nissan deals with lumpy B-roads with much greater aplomb. Very occasionally a severe bump thumps through, but otherwise it feels firm but absorbent enough. The BMW is much busier, the front end distracted by scalloped verge edges while the rear… well, it’s frequently in turmoil, especially through bumpy corners.

At Bedford the Z4 gets to go first, for no other reason than it still has the timing gear on it. The first two laps are with DTC off, and the Z4 feels very keen. The balance on the 18in rims with their different-sized front and rear tyres is near-perfect. Through the Palmer Curves, for instance, the front end hooks up readily into the left and then full power just edges the rear out enough to keep it tight left before switching into the faster right. Through the quickest corners at the end of the lap, meanwhile, the tail slips enough on entry to nail the apices before regaining grip to power through positively.

The brakes, so often a BMW weak spot, wilt a little but still have bite on the fourth flying lap, which is impressive considering they’d first been worked hard an hour before at Millbrook.

With no bumps to befuddle it, the Z4’s handling is balanced and responsive, nuances of feedback and feel subsumed by the straight-forward need to stop, turn and go as directly as possible. The time is good, too: 1:30.8 with all aids off (a second more with DTC). That’s the best part of a second quicker than the similarly engined, slightly heavier 130i we tested last month, and this is a much hotter day.

As on the road, on track the 350Z feels heavier, more inertia-laden, and its turn-in is a fraction less positive. Get too eager with the throttle and it will push wide, but give the front tyres the moment they need to key in, or get the tail to help on turn-in, and you can use the extra power to full effect. So while the Nissan’s corner apex speeds are generally no better than the BMW’s, its traction and balance (assisted by the viscous limited-slip diff) are such that it can make the highers speeds on the straights. Also, its Brembo brakes have much better feel and bite. It posts a best of 1:29.1, on a par with the M3 CS.

Still, on a short test drive the BMW can justify its apparent £5K price premium over the Nissan. It tucks you down into a more intimate cockpit, has a deliciously creamy drivetrain and the most beautifully weighted, quality controls. And it’s no slouch. As tested, the price difference isn’t as great between the two cars here, either. This 350Z is the ‘GT’ version, which adds a fine Bose stereo, heated, electrically adjustable seats and cruise control for an extra £2500. It also has ‘Temper Orange’ metallic paint (£450), lifting the as-tested price close to £30K. A £2000 premium seems reasonable for the BMW, especially if you’re in thrall to its looks.

If that’s you, we’ll struggle to persuade you that the Nissan is the better car, but if you really want to drive, the 350Z is unquestionably more capable, inspiring and, ultimately, faster over all types of road. And if you can make do without the GT pack and the orange chew paint job, it’s a genuine bargain too.