Jethro Bovingdon laps the Nürburgring in the 350Z Convertible, and given a reminder that the über-circuit demands total concentration 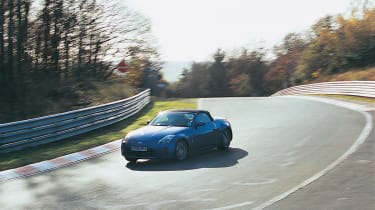 The Nürburgring’s ability to pack all four seasons into 13 miles of the scariest tarmac in the world is legendary, but despite numerous trips out there over the last 18 months or so, I’ve never driven it in anything other than perfectly dry conditions. Most of my laps there have been in my M3, too, a car with masses of grip and the most benign balance. I’d almost started to think it’s not such a scary place after all…

And then I decided to pay a visit in November, at RMA’s last two-day Ring adventure of 2006. RMA events are always brilliant fun, with a high standard of driving, a great mix of cars and impeccable organisation. I drove the M3 out (the weather forecast was bad, but you never really know with the Eifel region) and Kenny P crammed all his camera gear into the 350Z. Two days at the Ring with two cars to play with – it doesn’t get much better.

Torrential rain pounding on the windows woke the whole hotel at about 5am, but by the time the track opened at 9am the sky was clear and the combination of bright sunshine and strong wind was rapidly drying the track. Day one, then, would be an M3 day – on Dunlop Direzza trackday tyres, it’s a car best left alone if the surface is very wet.

With its straight-six loving the crisp, cold air, and the tyres getting up to temperature without any trouble, the M3 was in its element again. So much so that I decided to call Dirk Schoysman and see if he fancied having a go for a lap time – the circuit would be shut for 20 minutes or so later that afternoon for a full-on record attempt by a Bilstein 911, and the M3 would be allowed to follow in its wake. Twenty minutes later, Dirk was at the track.

But fate was to deal another cruel blow, the M3 developing a knock from its nearside-front suspension. From the wheel skipping about over the bumps it was pretty obvious we’d had a damper failure. Dirk went out anyway, to see how the shorter gearing, Quaife diff and stiffer set-up worked, but he couldn’t drive flat-out.

However, he reminded me that industry and Auto Motor und Sport lap times aren’t actually for a complete lap – the timing begins at the end of the old pit lane and ends a few hundred metres further back. It’s not a great difference, but probably worth 3 or 4 seconds. So let’s say the M3’s best effort so far (evo 086) was in fact an 8:19/8:20. And it’s definitely much quicker now – even with a broken damper and a gaggle of cars holding him up in places, Dirk clocked an 8:34 – but we won’t be able to prove it until the spring.

So the 350Z got its chance on day two. No rain, but very cold conditions and no wind at all meant the circuit remained slick with dew in all the shaded areas – and the shaded areas are all the very fastest parts of the circuit. I was about to get a glimpse of how quickly the Ring can bite if you relax for even a moment…

I’m pretty comfortable with oversteer, especially in the 350Z, a car I’ve been driving for six months now, but oversteer at around 120mph on a section of track with no run-off area is very, very uncomfortable. Heart-stoppingly, change-your-trousers uncomfortable. It happened three times on three successive laps, on different sections of the long flat-out drag between Bergwerk and Klostertal.

At that speed any correction needs to be millimetre-perfect, and the fact that the 350Z stayed on the glistening track says more about its wonderfully controllable chassis than my driving ability. Having said that, the Z’s weight does start to tell at such high speeds. Into three-figures on undulating, unpredictable surfaces, the 350Z occasionally feels as if it’s floating on its suspension rather than being pulled down onto the road, and when float turns to a thump as the weight settles again on its springs, the Z is shocked into momentum oversteer.

Of course, this is hardly everyday driving, but it shows there is scope to improve the Z’s body control. It would be interesting to see if the coupe would cope better with the rigorous demands of the Ring.

Even so, the brawny 350Z was great fun. It has just enough built-in understeer to give you confidence but not hamper your speed, and enough power to dictate things with the throttle should you so desire. Weirdly, that isn’t often on the Ring, the only corner where you really want to ‘play’ is the right-hander before the Karussell; the rest you try to attack clean and fast.

SFX managed four-lap bursts with no real brake fade and just nicely buffed (rather than torn-up) Bridgestones to show for its efforts. And it was really very quick, hanging on to plenty of 911s and even driving in the long shadow of a beautiful Ferrari 250 LM (my favourite Ferrari of all) as the sun set on another brilliant couple of days at the Ring. Awesome doesn’t quite cover it. My only regret is that I forgot to use the Z’s lap-timer function to see how quickly it was negotiating the slimy circuit.

In fact, it made me think that if I had a bit more money sloshing around for a Ring Taxi of my own I’d be checking out early 350Zs. Imagine one with a half cage, adjustable suspension and some monster brakes… And you could always add a supercharger when you’ve saved up a bit more money. Hmm… Target 7:50, anyone?

Yet the truth is that you could be in a £100 Nova and have a great time at the Ring. I know we go on a bit about this place, but you must visit it. It’s an incredible circuit, set amongst Germany’s most beautiful scenery, and is full of likeminded enthusiasts all determined to have a great time. You don’t need a Porsche or Ferrari, nor the driving skills of Herr Röhrl. Just get out there. Petrolhead nirvana is just 350 miles from Calais.