Henry takes custody of the 350Z, and puts his reservations about its drop-top aside for a month 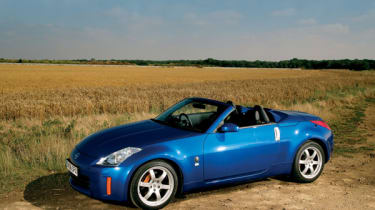 As usual when there’s something monumentally expensive in the evo car park, Jethro left slightly early, mumbling words to the effect of ‘Well, if nobody else wants it…’ followed improbably quickly by the sound of the office door clicking shut and multitudinous cylinders exiting the car park and heading rapidly into the distance. All of which left his Nissan (or Datsun as my father insists on calling it) at the Catchpole disposal.

Now, I love the 350Z coupe, but I’ve always looked on the Roadster as being more suited to the sort of fellow who uses male grooming products. Somehow the big gruff Zed, with its hefty gearchange and steering that requires a bit of forearm, just doesn’t seem to fit with the image of a drop-top.

But there was one crucial climatic factor that meant I went all-out to cling on to Jethro’s 350Z key for the best part of a month: precipitation. Rain, snow, sleet… as long as there was something falling from the sky and forming a thin film of grease across the surface of the road, the 350Z was the only place to be. My name isn’t Barker, so I don’t pour my cereal with a touch of oversteer, but, given a selection of roundabouts and a sidekick like the 350, opposite lock very quickly becomes a very enjoyable way of life. And image doesn’t matter when you’re going sideways.

In truth, even just starting up the big-chested V6 made me feel good about the day. It’s got more burly character in its exhaust note than you’d expect any Japanese car to have. The whopping 80-litre petrol tank was a surprise too. Fill-ups bruise the wallet a little more, but it gives the Nissan what seems like a galactic range, especially after my regular Subaru.

Before the 350Z went off to the Nürburgring it was fitted with new rear Bridgestone Potenza RE040s, the originals having ripped themselves to shreds during a few laps of the Bedford Autodrome’s West Circuit (although admittedly Jethro was driving for the camera rather than lap times). The fronts, however, are still well shy of the wear indicators, even with over 10,000 miles covered (Jethro is apparently working on turning-in harder).

It was beautifully frosty the first night that I had the 350Z and I thought it’d be fun to drive home with the heated seats set to gas mark 6 and the roof down (as it was nearly midnight I figured nobody would see me). It was then that I discovered that the deputy editor had left me with a roadster whose roof didn’t go down. Classic.

The passenger door also occasionally refuses to open even when unlocked, and Jethro informs me that he’s had to top up the power-steering fluid a couple of times. None of which is disastrous, but it’s a bit of a surprise nonetheless. Still, all of it should be sorted at the first service, which is now about 1000 miles overdue. Must be all those rainy afternoons spent in Milton Keynes.