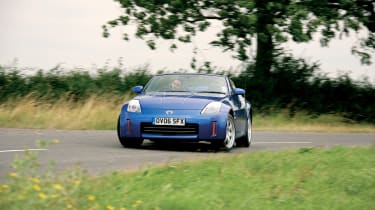 The word ‘convertible’. Innocent enough, you might think, but when applied to a perfectly good saloon or coupe, it can take on a more sinister bent. Usually it can be interpreted as shorthand for ‘heavier’, ‘softer’ and ‘wobblier’, or just plain ‘compromised’.

Yet, right now, life without the convertible 350Z that I’ve spent the last ten months driving really hurts. I’ll miss everything about it: the big, snarly V6, the chunky weighting of the six-speed ’box, the sweet balance and incredible playfulness of the chassis. Then there was the intuitive satnav and the GT Pack extras such as the steering wheel-mounted cruise control and the monster Bose stereo… What’s not to like? After nearly 14,000 miles I can report that the answer is not very much at all.

Our Azure Blue Zed arrived in the midst of a heatwave in July 2006 with just 169 miles on the clock. The handbook warned of dire consequences if you breached the 3500rpm running-in ceiling before the 1200-mile mark, so I didn’t. Well, not too often. Instead I got to know the Nissan’s more sedate qualities: that brilliant satnav, the supple, composed ride and the 3.5-litre V6’s torquey low-down delivery. Frustrating? Not as much as you’d imagine.

After just a month or so I’d really started to bond with the convertible 350Z, which was something I hadn’t really expected. Previously I’d found the Zed a bit too knowingly old-school, the artificially heavy controls annoying rather than endearing. But the ’06 upgrades were so effective that I found these complaints just dissolving away. The revised car felt keener and more alert, and lighter on its feet too. Steering, brakes and gearshift were still quite weighty, but it felt natural, not contrived.

Of course, some of the coupe’s composure disappeared with the decapitation. Ragged tarmac could turn the steering column to jelly and the structure shimmied where in the coupe it would have remained rock-solid. It certainly wasn’t as stiff as something like a Boxster, but as time went by I found myself forgetting about these distractions and enjoying the quality of the work going on at ground level, details of which came flooding through the steering wheel and seat.

The chassis was crying out for a track workout, and a bit of ‘scientific’ lapping at the Bedford Autodrome uncovered a smidge more understeer than we found in the coupe and a minor dulling of its ability to change direction. Oh, and an irresistible appetite for long, smoky, oversteer slides. The Bridgestones weren’t so keen, however, spitting off great chunks of rubber after half a dozen lairy laps. With just 4500 miles on the clock we were already looking at a set of new rear tyres…

Fortunately Bridgestone wanted to look at the torn-up tyres, so replaced them like-for-like. The fronts, meanwhile, were fine. In fact they were still on the car when we handed it back, despite a trip to the Nürburgring and lots of hard-driven road miles. Only a final trackday at Snetterton got them down to the wear indicators. Pretty impressive considering the good grip level they seemed to provide.

So from a dynamic point of view the 350Z certainly stacked-up, even without a steel roof. However, we had some concerns about the car’s reliability. First I noticed the steering getting very heavy and trying to shake itself out of my hands over quick-fire lumps and bumps. In fact it felt very much like the trackrod-end problem I’d had with my previous Porsche 993 long-termer. Nissan couldn’t find any loose parts, but when the car came back I checked the PAS fluid and found it to be very low despite no obvious leak. Topping it up cured the symptoms, and the system required a further top-up a couple of months later.

Less intrusive but just as annoying was the electric hood suddenly refusing to retract fully. Everything whirred sweetly and the roof would flip back and up into the air, but the cover for the hood stowage area wouldn’t open, leaving the canvas top in the upright position. More annoying still, after a couple of months of intermittently trying to retract the hood to no avail, when we took the car in to Camden Nissan in Northampton it worked first time. Brilliant.

Occasionally the passenger door wouldn’t open either, despite appearing to be unlocked. Flicking the lock/unlock button on the driver’s door would release it eventually. Of course, this was another problem that Camden couldn’t replicate. They must have thought I was mad…

The Zed’s first service was due at 9000 miles, but I’m ashamed to admit that SFX had over 10,000 miles on the clock when it finally got some TLC. Camden Nissan were helpful and swift, but the service area was so cluttered with cars that the experience could hardly be described as luxurious. Still, £201.95 for 9000 miles of motoring in a 300bhp rear-drive sports car didn’t seem too bad.

The highlight of our time with the 350Z was undoubtedly its trip to the Ring. It coped brilliantly with the long schlep across Europe, then proved capable and rewarding to drive on the epic Nordschleife. Running behind a Ferrari 250LM, the low sun picking out the Ferrari’s beautiful shape while its V12 shriek filled the cool evening air, is a moment I’ll never forget.

We wanted to find out if the Nissan 350Z Roadster could be considered a true sports car, a cut-price Boxster rival, and I think it proved that it is exactly that. Yes, the Porsche is lighter, stiffer and more agile. However, it’s also more expensive and much less powerful. Strangely, I think the Nissan is more exclusive, too. When you consider the 350Z’s aesthetic appeal, its brawny engine and its price, it’s a wonder our roads aren’t clogged with them.

My final fling with the Roadster was the aforementioned evo Trackday at Snetterton. It killed the brakes (new front discs and pads costing us nearly £650!), but it was a fitting swansong, the car carrying great speed and drifting beautifully through every corner. Unfortunately, I was black-flagged and told to leave after two sessions for ‘taking the piss’. A touch harsh, I thought, and an ignominious end to a fantastic ten months.