A new, more powerful V6 keeps the Z at the top of its game 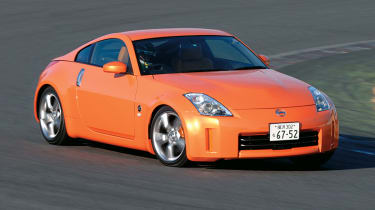 We’re at Tsukuba Circuit, Japan’s most popular race track, for an early drive in the new Z-car. As I exit the final hairpin in second gear and bury my right foot, the tacho needle heads past 6000rpm… What happens next is what differentiates the new 350Z from the current model. Where the current V6 revels in the low to mid-ranges but fizzles out above 6000, the new engine fairly rockets through 5000rpm and just keeps pouring on the power. By the end of the back straight, the new Z is tickling 125mph and just getting into its stride…

The current 350Z has long been an evo favourite. It looks the part, sounds great, steers well and has enough power to jump from zero to 60mph in under 6 seconds. It has certainly done its bit to keep the 37-year-old Z legend alive, with more than 200,000 sales around the globe. And its ‘VQ’ 3.5-litre V6 has kept racking up the engine awards, winning America’s Wards gong every year since the turn of the century. But having just planted a brand new 3.5-litre V6, the VQ35HR, under the bonnets of the new Skyline and Infiniti G35, Nissan thought it was high time for another major transplant, this time into its hottest coupe.

With its new power unit, the mildly facelifted 350Z pumps out a healthy 313bhp at 6800rpm, up from 296bhp at 6400, while peak torque rises a smidge to 264lb ft at 4800rpm, though that’s only part of the story. You’ll have to look closely to spot the cosmetic changes. In fact the only sheet-metal modification was made directly above the powerplant. The new V6 uses 80 per cent new components, including a revised block and induction system that together add some 15mm to the height of the engine. That’s the reason for the new bonnet bulge, which is also a visual nod to the original 240Z. The only other outward changes are slightly different lights and some new colours, including the ‘Premium Passionate Orange’ of our test car.

But it’s only fitting that attention should be drawn to the new engine, because it plugs what was the biggest gap in the Z’s dynamic performance and lifts the driving experience a whole notch.

It took just two corners of Tsukuba to realise just how much more freely the new HR unit spins to the 7500 red line. The outgoing VQ engine had loads of punch down low, but lacked staying power through the top end. The HR fixes that nicely. Boasting a drier but beefier exhaust note that takes on an addictive roar above 5000rpm, the new V6’s torque curve has filled out in all the right places: while its newly found high-end vigour will encourage you to keep the engine on the boil above 5000rpm, there’s more torque low-down too.

Another hairpin at Tsukuba, and I allow the rev-counter to drop to just 2000rpm. I floor the throttle again and this time my gob is smacked by the torrent of torque that surges forth and doesn’t seem to let up, right up to the 7500rpm red line. On a track, at least, the new Z is the business. With a chassis that’s still happy to indulge you, and powerful brakes too, the revised model is even more of a blast than its predecessor. Most of all, it makes you want to hold on to gears just to savour the rush of power and sound.

And out in the real world too, the new Z’s an improvement, the wider torque curve making even town driving a pleasure. We also took the new car for a spin around the mountain roads south of Tokyo. At normal speeds, the Z’s steering is as precise and turn-in as sharp as it’s always been. There are no major modifications to the car’s suspension, just slightly revised damping. However, the newly fitted Bridgestone Potenza RE050 tyres (225/45 18s on the front, 245/45 18s at the rear) seem to provide slightly more grip at regular road speeds, while also lowering noise levels and improving the ride.

Back on track, push the Z as we did through Tsukuba’s long right-hand sweeper and it will understeer at first, but feather the throttle and understeer soon turns to neutrality before you can use the Z’s extra torque to steer on the throttle – and it all happens even more progressively than before. The extra top-end means that the rear will break traction even more easily, but also that the slide is easier to hold.

Thanks to that all-new V6, Nissan engineers have taken one of Japan’s best sports cars and targeted its one weak spot – that shallow top end – to produce a truly great drivers’ car. You’ll want to keep it hovering between 5000 and 7000, just like I did – but you won’t panic when the needle falls below three-grand either. It still sounds loud and proud, too – and why not? The 350Z is something we should all celebrate. 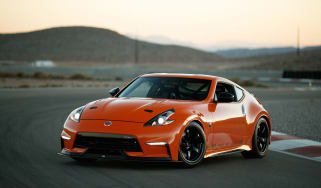 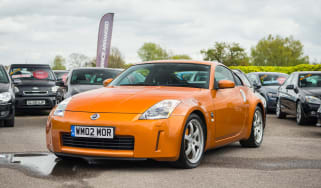 Nissan's mini muscle car is aging nicely and offers simple pleasures from just £5000. Is it all too good to be true?
Visit/nissan/350z/6220/nissan-350z-buying-guide 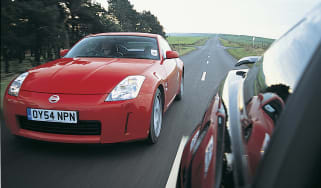 The reborn Z-car had old-school character but thoroughly modern build quality. Today, just £5500 could get you into a good one
Advertisement
Visit/nissan/350z/6184/nissan-350z-2008 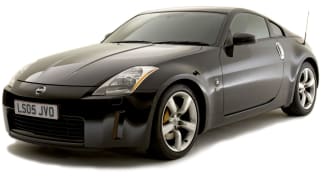 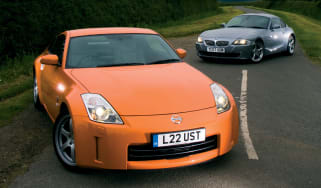 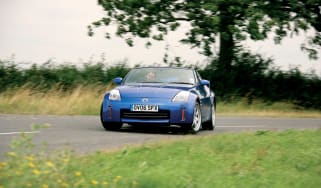 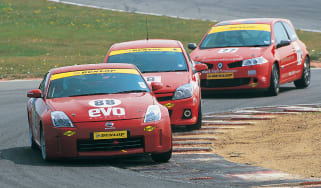 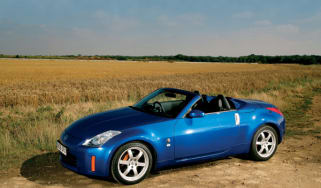 Henry takes custody of the 350Z, and puts his reservations about its drop-top aside for a month
Visit/nissan/350z/8359/nissan-350z-race-bred-350z-on-the-way 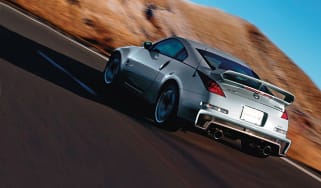 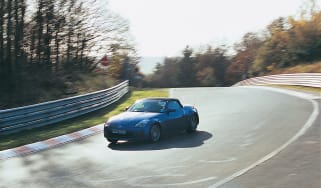 Jethro Bovingdon laps the Nürburgring in the 350Z Convertible, and given a reminder that the über-circuit demands total concentration
Visit/nissan/350z/8241/nissan-350z-roadster 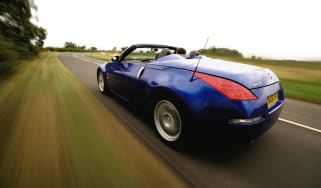 Bovingdon's been on track with his Nissan 350Z, with some undesirable tyre-related results
Advertisement
Visit/nissan/350z/8229/nissan-350z-roadster 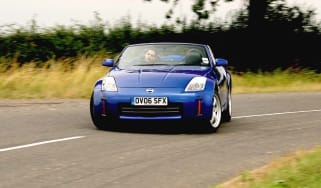 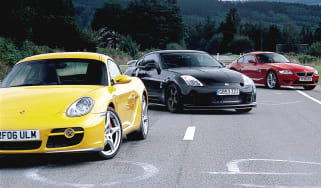 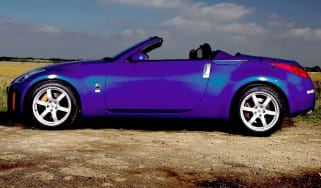 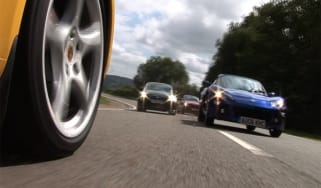 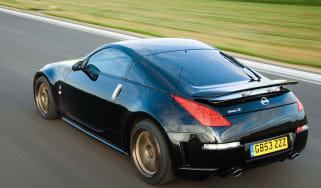 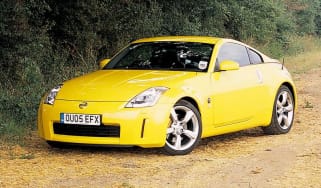 One of the more enduring and endearing features of our long-term Zed was that, no matter what other cars it was in the company of, it never felt like …
Visit/nissan/350z/7577/nissan-350z-gt4 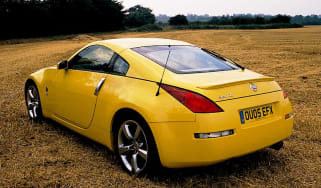 It's always good to have a 350Z knocking about the place, especially if it's the Anniversary GT4 variety with the extra 20bhp. Unlike the fairly subdu…
Visit/nissan/350z/6314/nissan-350z-296bhp 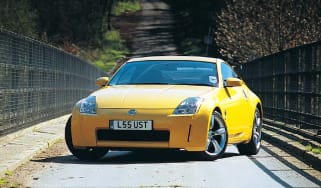 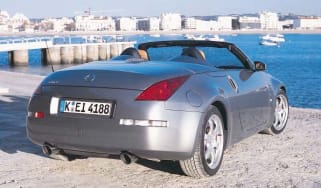 Is the perfectly poised 350Z good enough to survive a beheading with its dynamics intact?
Visit/nissan/350z/7443/nissan-350z 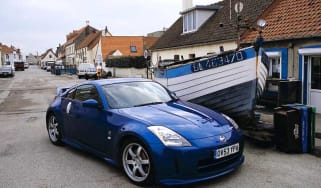 Regular readers will know I've become a massive fan of the latest-generation Z-car. I reckon it's one of the greatest affordable performance cars of t…
Advertisement
Visit/nissan/350z/7437/nissan-350z 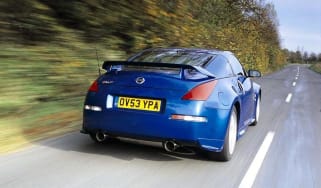 The 350Z's 3.5-litre V6 has always made a good noise; there's just never been quite enough of it. The obvious answer is to fit a freer-breathing exhau…
Visit/nissan/350z/7475/nissan-taking-orders-for-350z-roadster
Nissan 350Z coupe