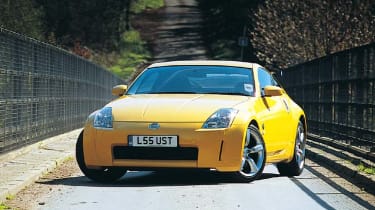 How's this for an anniversary present? Nissan has gifted the 350Z an extra 20bhp (raising the total to 296bhp) to celebrate 35 years of the Z-car. That's the good news. The slightly disappointing part is that the 35th Anniversary Z - also known as the GT4 in reference to the car's appearance on the Sony Playstation Gran Turismo game - is a special-edition model and all 176 of the UK's allocation may well already have been sold by the time you read this. However, enough work has gone into rearing the extra ponies to be compatible with the emissions regulations of a number of global markets, that it would seem silly if Nissan doesn't adopt this as the standard 350Z powerplant in the near-ish future. The PR folk at Nissan can't, of course, confirm or deny such a plan, but there does seem a certain logic to it, wouldn't you say? What's impressive about the power hike is the manner in which it's been done. Given the abundance of tuning parts available for the Z from Nissan's own motorsport-cum-aftermarket division, Nismo, you would have understood the temptation to merely bolt on some goodies from the go-faster catalogue. Instead, the engineering boys have installed revised pistons and camshafts and remapped the exhaust valve timing. At the same time they raised the redline (the Japanese market likes revvy engines, apparently) to 7000rpm from 6600rpm; peak power is developed slightly higher than on the standard car, too, at 6400rpm. Torque, on the other hand, falls by 8lb ft, proving what your mum used to say about not being able to have everything. While another 20bhp sounds like a lot, I'd be a liar if I told you that the GT4 (35th Anniversary is such a mouthful) feels gorblimey faster than a regular Zed. In fact, to start with you might even wonder if you've been mugged by a bit of marketing spin and that there really isn't a power increase at all. Give it a few miles, though, and you'll detect the engine's slightly greater eagerness to please, coupled to a sense of improved fitness. You begin to use the revs more than you do in the standard car, and can feel that at the upper end of the mid-range there's more energy available. What you still won't feel too much like doing, however, is revving the rumbly V6 all the way up to that higher redline, as there's no discernible advantage in doing so. The extra grunt doesn't completely transform the Zed, but it does seem to liven up the drive, adding a sheen of sparkle if not a full-gloss spangle to proceedings. Strangely, you start to imagine that the exhaust note sounds bolder than on the standard car, even though it's unchanged, and that the suspension has got extra edge, which it can't have because it, too, is unaltered. You can only conclude that subtle though the effects of the power boost are, they bring the 350Z's other assets into sharper focus. The 350Z GT4 costs £29,500, which makes it £1000 more expensive than the standard car equipped with the optional GT Pack and Rays alloys. So, other than another 20bhp, what do you get for that premium? One of two unique colours - the unmissable Ultra Yellow Pearl of our test car or Kuro black - sexy, unique Rays alloys and, tucked away in the boot, a gift box containing a PS2 console and a copy of Gran Turismo 4. There's no badging on the outside of the car to identify it, but if you look really hard down near the handbrake, there is a numbered plaque declaring this to be a limited- edition model. The 35th Anniversary doesn't so much expand upon the 350Z's talents as refine them. It remains a hairy-chested sports car in the best sense of the expression, verging on the raw and rough, demanding a robust driving style and a physically strong driver (the steering feels remarkably heavy if you've not been in a Zed for a while), yet in no area does it ever descend into crudeness or poor manners. As an affordable piece of personal, selfish transportation that you could live with day in day out, the brawny Nissan remains hard to beat. The fact that the 350Z's chassis can absorb 20 extra gee-gees while hardly flinching does show one thing, though - that here is a car crying out for a massive power injection to move it up another level. Next time Nissan's engineers fancy a play with the Zed, they should go the whole hog.