Putting the fast into Fast Fleet, we've got a Nissan 350Z to go racing in the Dunlop Sport Maxx Cup... 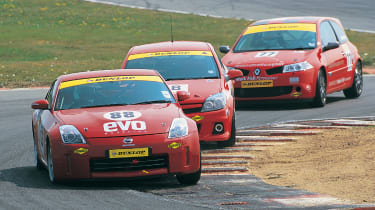 The new Dunlop Sport Maxx Cup promises exciting, accessible production car racing, so we’ve decided to get in on the action. But with just five days to prep our Nissan 350Z before qualifying for the first round, we were cutting it just a little bit fine…

MONDAY APRIL 23A blood red Nissan 350Z arrives at RJN Motorsport in Oxfordshire. It has 40 miles on the odometer. Darren Achilles, Martin Lucus, John Moawby, Ian Richardson, Bob Lillywhite, Darrel Harris, James McKinley and Gary Salter have five days and nights to get it ready for round 1 of the new Dunlop Sport Maxx Cup series.

Having prepared cars for the new GT4 series and built a very serious GT2 350Z for the FIA GT Championship, RJN knows the 350Z inside out. Even so, when I speak to boss Bob Neville on the phone on Monday afternoon, he only rates our chances of lining up on the grid at Snetterton at 50:50.

TUESDAY APRIL 2410.30am: John Barker and Richard Meaden visit RJN to see the car and meet the team. By now it’s all stripped out, brake lines and pads have been uprated and there’s a heap of components waiting to go on the car. John and Richard come back slightly wide-eyed at the job RJN has ahead. ‘How’s progress?’ I ask. They both look at each other and laugh. ‘Erm, yeah… I’m sure it’ll be fine,’ says Richard.

WEDNESDAY APRIL 2511.30am: Andy Morgan and I go to see the boys, and the car is starting to take shape. The Nismo suspension is on. It’s non-adjustable, but at this stage we can’t afford to be fussy, and at 52 per cent stiffer at the front, 34 per cent at the rear, the Nismo kit should be considerably more suited to Snetterton than the standard set-up.

Darren is looking a little battle-weary, but with the exhaust as the next job he seems pretty confident. The only problem is that the roll-cage still isn’t ready. Janspeed has promised it’ll be here tonight, though.

10.30pm: Still no sign of the cage. Not good news. Everything else has gone pretty smoothly, but as this cage is the first of its kind, RJN knows it won’t be straightforward to fit. Janspeed calls to say it’ll be ready tomorrow morning.

THURSDAY APRIL 26 9am: A truck waits outside Janspeed for the cage. Finally, at 10.30am, it’s loaded up and on its way.

12 noon: The cage arrives, and Darren and the boys start to wrestle it into position. It fits. Well, sort of – modifications are required to make it work properly. It’s a fiddly, labour-intensive process, and even little jobs like cutting the door cards (Sport Maxx regs say the original dash and door cards must stay) take forever.

1am: The cage is in place. It’s been in and out all day, being modified each time. But finally it fits as intended. Now it needs to be removed – again – sprayed and then bolted back in. Nobody is going home tonight.

FRIDAY APRIL 279.30am: I arrive at Snetterton in my long-term 350Z Roadster. This should have been our racing Z’s shakedown, an evo Trackday bustling with cars that include some of our competitors in the Sport Maxx series. Instead it’s just an opportunity for me to reacquaint myself with Snett.

My convertible Z feels pretty good. It’s soft, but grippy and very neutral. The engine pulls to over 120mph down the long Revett Straight and the brakes appear to last well in short bursts, but after three 20-minute sessions they’re well and truly cooked, the pads having dissolved. I’m still encouraged – I’d forgotten how much fun Snetterton is, and the Z has shown its potential. I just hope our race car makes it here tomorrow…

SATURDAY APRIL 283am: Darren and Martin – neither of whom went home last night – pack up their tools, load the 350Z racer onto a trailer and drive through the night to Snetterton. The car is ready.

8am: The red coupe rolls off the back of a trailer in the paddock at Snetterton. It looks for all the world like a standard road car – there are no stickers, and in a race environment the road-spec ride height looks quite bizarre. But to me it looks like the most beautiful car in Norfolk. Darren and Martin, who have come to support the car, are probably sick of the sight of it.

We sticker it up together, the Z taking on a more purposeful appearance as we apply Dunlop, Reverie and evo logos to the Z’s curves. Then we swap the original-fit Bridgestones for the Sport Maxx control tyres, go through all the fluids, adjust the belts for my frame and sink 40 litres of Sunoco 100-octane fuel (the control fuel for the series) into its tank. It’s ready.

11.18am: The enormity of what RJN Motorsport has achieved by simply getting the car to Snetterton hits me when I’m sitting in the pitlane waiting for the green light for the first practice session. I can see the effort spent etched into Darren and Martin’s faces, and almost count the lost hours of sleep just by looking into their half-open eyes. And now it’s down to me to make all the sacrifices count for something…

‘Remember, this is just practice and the car hasn’t turned a wheel in anger. The tyres are new, the brakes are new, the engine is new…’ Not Darren speaking, but me persuading my ego to stay put in the paddock. ‘And don’t worry if you get overtaken.’ Well, it’s worth a try…

Incredibly, the car feels instantly brilliant. The fresh, deeply treaded Dunlops are super-slippy, the brakes feel fragile, but the new 3.5-litre V6 is smooth and seriously keen. Even at just 100 miles old it pulls harder than any Z I’ve driven. And the chassis, despite feeling a bit soft for a racetrack, is so sweetly balanced that I’m wracking my brain to think of another front-engine/rear-drive car that’s so magically controllable. I come up with M3 CS, and nothing else.

I’m lapping at about 60 per cent, trying to get heat into the tyres and brakes but not cook them. It’s frustrating, but a necessary foundation for qualifying. I do one quickish lap just before the session ends, a 1:25.8. It’s just a second shy of the pace-setting Mégane R26 of Simon Gusterson.

3.55pm: Qualifying. It’s time to wind it up a bit. The Z might be new, but we need to push hard in qualifying to see how it copes with 20 minutes of sustained abuse. The brakes cope admirably for about 10-12 minutes, but then wilt alarmingly, and the tyres aren’t finding any more bite, but the Z is now in full cry down the Revett Straight, and despite a very oversteery set-up (not that I’m complaining!), a best lap of 1:24.8 is just four-tenths off Gusterson’s pole and three-tenths down on 2nd-placed Martin Wallbank’s Astra VXR. We’re in with a shout.

SUNDAY APRIL 2911.50am: Rock-steady 3000rpm, Mégane ahead and to the right, VXR filling the left-hand side of the windscreen, red lights above. The lights fade, I dump the clutch and balance wheelspin against grip. The Astra has made a good start, but the Mégane is struggling and I squeeze between the two hatches to take 2nd.

The Sport Maxx tyres are starting to come good, but the Z is still wildly oversteery in places – fun for me, and probably quite fun for Gusterson and Wallbank, but not very efficient. Even so I manage to keep the Mégane behind quite comfortably. But hunting down the Astra isn’t easy. It’s got lots of power – there’s nothing in it along the start/finish Senna Straight, and only right at the end of the longer Revett Straight does the Z’s big V6 start to get the better of the Astra’s turbocharged four. My hope is that the Vauxhall’s front tyres will start to overheat, making it struggle for traction.

After about six laps my theory comes good and I get better drive out of Russell Bend. Wallbank makes the Astra as wide as possible, but I manage to dive up the inside at Riches Corner. The 350Z is in the lead in its first race!

It lasts for all of ten seconds. At the next corner, Sear, I manage to run wide and then waste valuable seconds containing a lock-stops slide. The Astra and Mégane are well hooked-up and get ahead.

But the two hatches running almost side-by-side punch a huge whole in the air, and I get the mother of all tows along Revett, driving right between the battling hatches and back into the lead. ‘Make it stick this time’, I tell myself and, with the help of Wallbank and Gusterson becoming embroiled in their own battle, I manage to build a good lead. When I put a back-marker between the Z and the Astra and Mégane, I know it’s in the bag.

I’m denied taking the chequered flag when Simon Shaw’s Clio 172 and Kevin Turner’s SEAT Leon FR make contact at The Esses and drag part of the tyre-wall onto the track. But with just a minute or so left to run, the race is red-flagged and the 350Z is classified the winner – what a result!

4.20pm: Race 2. After the close-fought action of the first race, expectations are high for another good battle. Unfortunately the Astra is having turbo problems and the Mégane is hobbled by suspension damage sustained during an off-track excursion at the end of the first race. The 350Z runs like clockwork, though, its well-scrubbed tyres helping it hang on through the faster corners and eventually set the fastest lap (1:24.191). In the end I cross the line first, 30 seconds ahead of the struggling Renault.

It’s been a hectic week for the boys at RJN, and a steep learning curve for all of us at the track, but winning the first ever rounds of the Dunlop Sport Maxx Cup in a box-fresh car is an awesome feeling. The series needs more entries (Dunlop hopes to have 20 cars running later in the season), but the formula is fantastic, with incredibly close qualifying times in each class, and plenty of overtaking guaranteed thanks to the wide range of cars.

Now I’ve got to hand over the 350Z to one of my colleagues for the Oulton Park rounds (www.driversknow.co.uk for the full callendar). No pressure, boys…