The Renault Twingo RS 133 ceases production as the next generation city car lies on the horizon, with a hot hatch version due 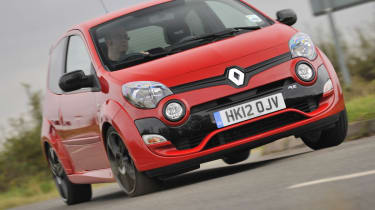 Renault has ceased production of its RS Twingo. The hot hatchback rivals the Suzuki Swift Sport and Mini Cooper, and has been a firm evo favourite since its 2008 launch.

With an all-new Twingo city car due in 2014, production of the current generation’s performance variant has ended, less than ten apparently remaining in UK dealer stock.

The Renault Twingo 133 is resolutely old school in its thinking, mating a five-speed manual gearbox and simple front-drive chassis to a front-mounted 1.6-litre naturally aspirated engine. With its 131bhp delivered at 6750rpm, it’s a powertrain that demands revs.

The performance variant of the next Twingo will be quite different. The next city car, which is twinned with the mk3 Smart, is rear-engined and rear-wheel drive, and will use only small capacity turbocharged engines. The most we can expect from a quick variant is a 1.2-litre petrol unit, though Renault could experiment with the 898cc three-litre engine currently put to use in the mk4 Renault Clio and the Dacia Sandero. A team-up with the six-speed EDC twin-clutch paddleshift gearbox in the Renault Clio 200 Turbo is unlikely due to the transmission’s cost.

While Renault is yet to officially confirm a future Renaultsport Twingo, company COO Carlos Tavares implied its existence when we met him at the launch of the TwinRun concept, which is a slightly OTT preview of how the car could look. ‘I can imagine that for A-, B- and C-segment cars, we have RS variations’ he told evo.

A newly hardcore Gordini spin-off brand could be applied to the Twingo, too. Like its Clio bigger brother, though, the new Twingo – in all its variations – will be five-door only.