Renault watchers expected a production version of the Twingo CC (coupe cabriolet) to make an appearance at the Geneva show this week, but were disappointed when it was a no-show 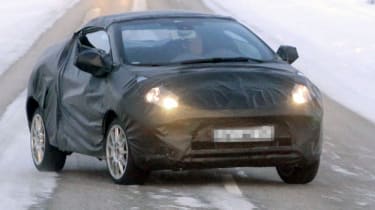 We've got some spy photos that suggest that all is not lost, however. The Twingo CC isn't gone, but its introduction seems to have been delayed for unknown reasons.

The last time a grainy picture of a heavily camouflaged Renault mule like this one surfaced, back in June, it was misidentified as a Megane III Coupe prototype. We now know that it's the open-top version of the Twingo, which is preparing to do battle with the Opel Tigra and Peugeot 207 CC in the entry-level segment. The drop-top Twingo CC is a two-seater with a one-piece retractable hardtop, rather than the common cloth top, providing all-weather protection and safety as well as summer sun and fun. It'll share the Twingo's 1.2-litre four-cylinder engine, but get a boost in performance to about 120 horsepower. It'll also be one of the least expensive ways to go topless.

First false reports accompanied by fake renderings put the Twingo CC concept debut at Frankfurt 2007. Then a production version was expected at last year's Paris motor show, and again at Geneva last week, but the Twingo CC remains a no-show, apart from the test mules we've seen so far. We're not sure what's holding the car up: word on the street suggests that there are engineering issues with the retractable hardtop delaying the launch.