Subaru Levorg review - it has all the classic Subaru ingredients, but does that make it exciting?

Permanent 4WD and a turbocharged boxer engine, the Levorg sounds promising. But, its CVT gearbox makes it hard to access its potential 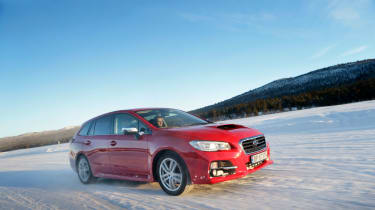 The Levorg is a four-wheel-drive Subaru estate with a turbocharged 4-cylinder boxer engine. Although it's based on the current WRX STI platform, sadly it's no modern day Impreza STI Wagon. In fact, despite a Levorg competing in the upcoming BTCC 2016 season, it’s not a performance car at all.

Considering Subaru’s intentions for the Levorg, dominating the mainstream rather than a gravel stage, the performance figures are respectable rather than remarkable. The Levorg has 168bhp from its turbocharged 1.6 litre boxer engine, permanent four-wheel-drive and goes from 0-62mph in 8.9 seconds. 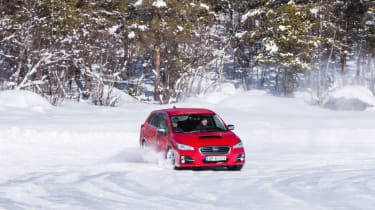 The only available gearbox for the Levorg is a CVT. This is to satisfy the Japanese, American and mainland European market that seem to like this sort of transmission. The benefits of a constant velocity transmission seem huge; it can vary torque seamlessly as it doesn’t need to swap gears and it can alter speed while keeping the engine at optimal revs for power or efficiency. But, to drive, a CVT doesn’t offer the level of interaction and involvement that a conventional auto does, let alone a proper manual.

The CVT in the Levorg can mimic a conventional geared transmission; it has predetermined ratios that it will skip between when you pull the paddles behind the wheel. The shift between the ratios is vague, and there’s a softness to each selection. The up-shifts are relatively quick, but it sometimes makes you wait a frustratingly long time a lower gear.

When selecting your own ratios, the engine feels reluctant to rev right out to its redline. It sounds quite coarse too; there’s none of the charismatic noises typical of a turbocharged Subaru boxer engine.

With the CVT left to its own devices, it’s very hard to understand what’s going on. The revs don’t seem to increase at the same rate as the acceleration, and as the revs stay faily constant the noise of the engine becomes wearing. I have no doubt that whatever is controlling the engine and transmission is exceptionally clever, but the sensation is very hard to get used to.

It’s nothing new, and especially not for Subaru, but the technical highlight of the Levorg is its four-wheel-drive system. We’ve come to expect cars of a similar size and cost to the Levorg to have part-time 4WD systems like Haldex. Now, what with Audi also changing their Quattro system to a 4WD on demand system, permanent 4WD as found on the Levorg is a rare thing.

The Levorg’s system comprises of a multi plate centre clutch. Its default is to distribute the torque 60:40 front and rear. However, it can vary the spilt depending on which axle needs it.

Both the front and rear diffs are open, despite this the Levorg is very capable on low traction surfaces. That’s thanks to brake-based torque vectoring and a sophisticated traction control system that's not too intrusive. 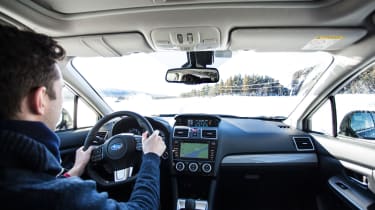 The interior is a step up when compared to Subaru’s WRX STI. This is mostly down to the integrated, touch-screen satnav, which looks and feels modern. However, the tone when selecting between the driving modes sounds like an 80s dialling tone and you can hear the relays that control the intermittent wipers click. So, although initial impressions of the Levorg are good, there is a lack of sophistication compared to its rivals.

For an estate, the torsional rigidity of the Levorg seems very impressive. This gives the suspension a fantastic base to work off, and although the ride is firm that doesn’t manifest itself into a rattly interior.

The steering is surprisingly quick and immediate, combined with little body roll, it gives the car a feeling of eagerness. However the self-centring of the steering seems peculiar, requiring more effort to get it pointing straight than feels natural. The firm ride and limited body roll is where the sportiness ends, over large bumps and crests the suspension does take some time to gather itself.

All the dynamically demanding roads of the test route were covered in snow, as is typical of Norway in March. To come to a more definitive conclusion, we will have to drive it on UK roads. What can be gleaned from this snowy drive is that traction from the 4WD system is very impressive especially when combined with some winter tyres (Continental ContiVikingContact 6). The traction control, which can’t be turned off fully, rarely needs to interfere.

Once confidence in the car increases it's easy to get into the habit of using the traction control as a safety net. The Levorg won’t oversteer under power as it prefers understeer. However, if you’re relatively aggressive with the steering the Levorg will rotate into oversteer briefly before the traction control cuts in to straighten the car. The traction control doesn’t allow for a huge amount of slip, even it its looser mode, but it is very useful on unknown roads with low traction surfaces while also remaining fun.

It must be said that what feels good about the Levorg does feel very good. There are elements that hinder it in terms of engagement and pure enjoyment, but there’s a sense that there is a real quality to the engineering underneath. 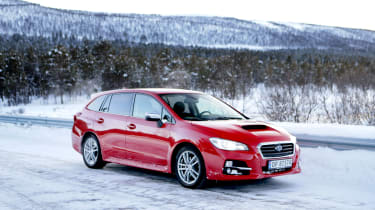 The Skoda Octavia vRS, with either the diesel or petrol engine, is cheaper and more powerful than the Levorg. The Skoda has a better gearbox too, whether it be the manual or the DSG. It’s also bigger, arguably looks better, and has a more cohesive, sophisticated interior. However, the standard vRS doesn’t have 4WD. But, for just over a thousand pounds more than the Levorg you can get a diesel, DSG-equipped vRS with a four-wheel-drive system.

The Skoda can vanquish almost any challenge the Subaru can throw at it. The Subaru does have one card up its sleeve though, that permanent 4WD – the Skoda’s Haldex system just simply isn’t as dedicated.

The Levorg is a capable car, and if traversing slippy terrain was something you needed to do regularly, it would be a dependable machine. But its less than engaging drive, predominantly due to its gearbox, means that its rivals overshadow it.