The Levorg gives buyers an interesting left-field estate option, but there are more complete rivals available 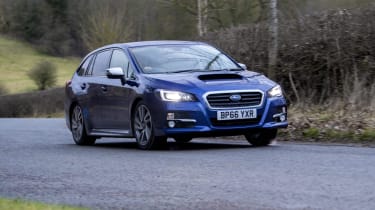 The Levorg is effectively a Subaru Impreza wagon - but it serves a more important role in the maker’s lineup than that. The Legacy has always been a big seller for Subaru, but its constant growth has seen it become a little large for some customers, so the Levorg, launched in 2015 but facelifted in 2017, fills the gap it left behind.

Nothing so conventional as a transverse inline-four beneath the Levorg’s hilariously-scooped bonnet; instead there’s a 1600cc, horizonally-opposed four cylinder sitting lengthways and utilising turbocharging to endow it with suitable performance. 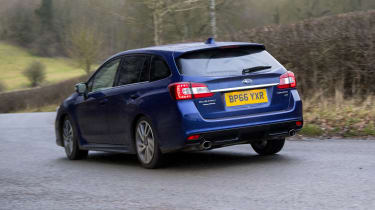 Maximum power of 168bhp is developed between 4800-5600rpm, with 184lb ft of twist available between 1800rpm and 4800rpm. The resulting acceleration and top speed figures are respectable, if not spectacular - sink the right-hand pedal from rest and 62mph arrives in 8.9 seconds, with a quoted top speed of 130mph. Combined economy is 39.8mpg, though you’ll need a gentle approach to achieve it - low-thirties are more likely in typical driving.

The accelerative sprint is no doubt assisted by another common Subaru feature, all-wheel drive. Less familiar is the Lineartronic continuously variable transmission, which can operate like a traditional CVT but also presents six virtual ratios, which can be used to give the transmission the feel of a regular automatic - and allows the driver to select ratios using paddles mounted behind the steering wheel.

Subarus seem to share a family feel regardless of whether they’re a turbo-nutter STI or a jacked-up Forester, and the Levorg predictably splits the difference between those models.

A solid feel permeates through the car, from moving the chunky shift lever through the gate, to the steering weight, to the way it tracks through a corner. It’s a confidence-inspiring car this, and would surely feel even more so in the kind of awful weather that sells people on xDrive BMWs, Quattro Audis, and Subarus past and present.

There’s an abundance of grip at both ends, and while the steering doesn’t give you a great idea of how much is left it’s accurate enough to pick your preferred line through a corner. The 1.6-litre engine and CVT combination doesn’t get close to testing the all-wheel drive system’s traction on dry tarmac, but for some that’s all part of the appeal.

The firm ride may deter some though, occasionally thumping over bumps and crashing through craters, though there’s good body control and minimal roll. The brakes feel good too, with a firm pedal underfoot, again contributing to the feeling of solidity that permates through the car. Less impressive, and somewhat at odds with the quality feel, is the surprising level of road noise that makes its way into the cabin - Subaru’s refinement tweaks clearly didn’t go quite far enough. 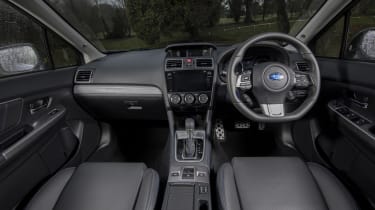 Let’s talk CVT. This much-maligned transmission rarely operates in a way that correlates with driving pleasure, but the Levorg’s unit is better than most. By and large, it operates like a traditional CVT if you’re driving gently, letting the revs rise and fall according to engine load demands rather than road speed. Call for more performance, and the revs rise too - though the transmission takes on the feel of a more conventional transmission, using virtual ratios for a more “natural” acceleration feel.

Learn the transmission’s ways and it’s possible to make brisk, unflustered progress, and there’s always a smooth, elastic feel to the acceleration, but the noise generated at full throttle and the unusual responses can get a little wearing if you’re more used to conventional gearboxes.

At least the boxer engine itself is smooth, and there’s a reasonable turn of pace too - but we can’t help feeling that a regular manual gearbox would better suit the Levorg’s character. And character is something that may well attract you to the Levorg in the first place. Despite its faults, the Levorg is an interesting, unique proposition in its segment, and that may be enough on its own for some evo readers. 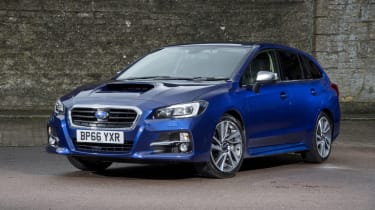 The Levorg is built in Japan and therefore at the mercy of fluctuating exchange rates. That could explain the £29,995 price tag, which seems uncomfortably high given the Levorg’s capabilities.

Similar money - £29,400 - would get you a Skoda Octavia vRS estate with an automatic (DSG) transmission and 4x4 drivetrain, as well as a frugal diesel engine (55.4mpg combined) and quicker acceleration (0-62mph in 7.7sec).

In purely emotive, subjective terms the Skoda is perhaps a little bland, but objectively it bests the Subaru in basically every area. Including practicality, given the Octavia vRS estate can hold 610 litres of goods seats-up, to the Subaru’s 486 litres. If you’re at all considering estates like these, that has to be a consideration.