Subaru Forester 2.0i XT review – What is the fastest Forester like to drive?

Old Foresters were cult icons thanks to being blessed with STI modifications, but does latest Forester have any of the old Subaru magic? 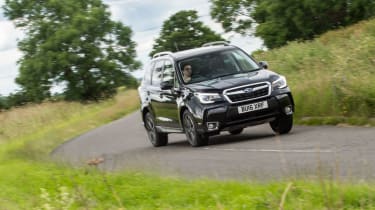 The Subaru Forester is no longer the tough, jacked-up estate car that it once was. The original car preceded Audi’s A6 Allroad and Volvo's V70 XC and, arguably, was one of the first crossovers. The Forester is now a conventional small SUV to rival the SEAT Ateca, Ford Edge, Land Rover Discovery Sport and Volkswagen Tiguan.

The Forester still retains some of its tough and capable credentials thanks to its full-time four-wheel drive system – something that its closest rivals cannot compete with. Rather than calling in the rear axle to help only when the front tyres loose grip, like the Haldex system in the SEAT and Tiguan, the Forester has a centre differential that constantly distributes torque to both axles.

As is traditional for a Subaru, the Forester user a boxer motor; an engine with the cylinders sitting horizontally either side of the crank. The Forester’s boxer is a four-cylinder, 2-litre, turbocharged petrol unit that produces 237bhp. That’s certainly not an insignificant amount of power, and its 7.5sec 0-62 is also quite respectable.

The XT Forester has Subaru’s Lineartronic transmission. It’s a constant velocity transmission so doesn’t have separate gears, instead pulleys within the ‘gearbox’ move in relation to a metal chain to create infinitely variable ratios. This means the Forester can change speeds with engine at a constant revs. 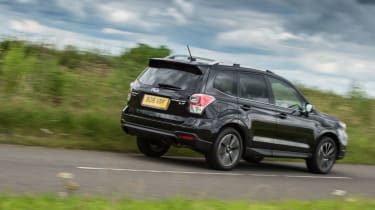 The initial feeling of the Forester is that it is a very solid and well put-together car. Not a hint of a creaks from the interior, no extraneous rattles or judders from the suspension and no slack in any of the controls. It deals with rough roads remarkably well, the suspension and the tyres' high sidewalls absorb the worst potholes. However, despite such soft suspension, you don’t feel disconnected from the road thanks to the sharpness of the steering and pedals.

The Forester is also capable of being pretty brisk too. Ok, it couldn’t really be described as fast, but it isn’t a sluggish SUV. However, driving it at a quick pace is perplexing because the CVT gearbox is so peculiar.

It doesn’t take long to realise the ‘box is best left to its own devices. The gear changes are so frustratingly slow and indirect when using the paddles behind the wheel that you simply don’t bother anymore. This is because the manual changes don’t swap any cogs but just move between different pre-programmed ratios; it takes time for the transmission's internals to move and there’s no satisfying connection when it finally sets its position.

Left in auto the combination of engine and transmission actually work together very well, even if what it’s doing isn’t easy to understand if you aren’t used to a CVT. The engine makes all sorts of funny noises that don’t relate to speed – the revs don’t change for ages then suddenly drop – but as strange and as unnatural as what it’s doing sounds, it’s actually working out the optimum ratio and revs for any given situation. And, for the most part, judges it well. The transmission doesn’t quite select a low enough ratio for most corners, and it does feels sluggish once you’re back on the throttle. If, on the rare occasion, the ratio is low enough to make the Forester feel punchy then it will understeer if you’re too aggressive with the accelerator.

However, unless you’re really throwing the Forester around, it feels very composed. It rolls gently and sits on the outside rear wheel when cornering, but there’s plenty of grip so you can carry a significant amount of speed confident the Forester will remain planted. 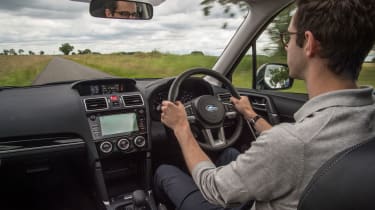 The Forester’s interior isn’t as classy, or as cohesive as its rivals; the plastics feel cheap and the graphics aren’t consistent. Being able to hear relays clicking when the wipers are set to intermittent doesn’t help the Subaru feel very premium. Thankfully the light and airy nature in the cabin redeems it from being too dull.

The Forester’s lofty stance and mini-SUV proportions don’t promise a particularly exciting drive and, without being either adjustable or involving, it lives up to its appearance. However, the Forester isn’t disappointing either as it is a capable and controlled car.

The base non-turbo, 2-litre Forester starts at £25,495, which puts in right in the firing line for our current favourite SUV, the Seat Ateca. The Forester is more powerful than the equivalently priced 1.6-diesel Ateca, but the Seat feels like a more considered and stylish package.

> Click here to read our review of the Seat Ateca

The XT version, as tested here, is £30,995. That’s a similar price to the Discovery Sport but the Land Rover, despite the brand’s reputation for off-road prowess, doesn’t have permanent four-wheel drive like the Forester does.

Neither car will be bought on their off-road abilities, nor will their on-road manners be that relevant either; style is what will matter to many buyers, and the Discovery Sport, with its short overhangs and tough looks, will probably attract more fans. 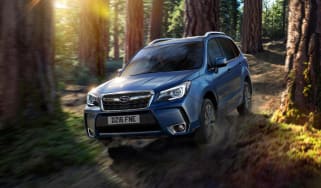 No mechanical changes, but a host of other improvements should make Subaru's stalwart better to live with
Visit/subaru/forester/7330/subaru-forester-20-xt-review-price-and-pictures 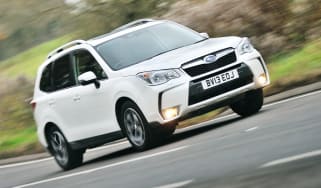 Can the Forester return to being the thinking driver’s SUV of choice?
Visit/subaru/forester/7313/subaru-forester-review-price-and-specs 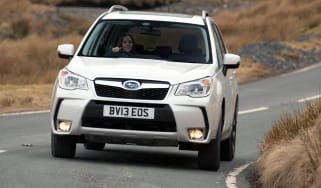 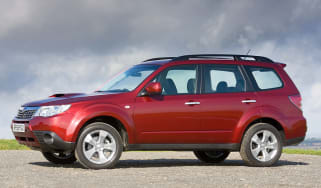 Roomier, less thirsty, but not as appealing
Visit/subaru/forester/7583/subaru-forester-25-xt 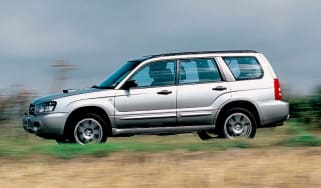 Picture the scene. You've been part of the evo team for a few months, the familiar names from reading the magazine are rapidly becoming the familiar f…
Visit/subaru/forester/7553/subaru-forester-25-xt 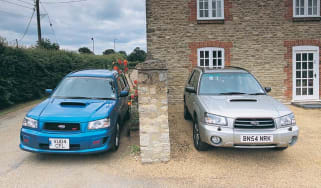 Why don't they sell them over here? That's all I could think as I handed back the keys to my Forester's more glamourous sibling. I know the STi is sti…
Visit/subaru/forester/7518/subaru-forester-25-xt 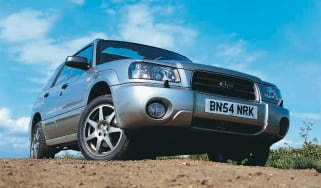 My ride has been pimped! The new 17in Prodrive wheels have finally been fitted, and along with the extra 'bling factor' there's the promise of loads m…
Visit/subaru/forester/7504/subaru-forester-25-xt 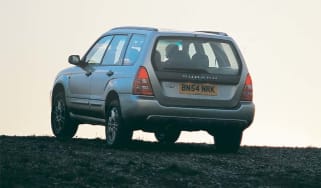 What fun. An Impreza on stilts. I can remember thinking the same thing when I drove our previous Forester turbo long-termer, the mk1 version, six year…
Visit/subaru/forester/7447/subaru-forester-25-xt 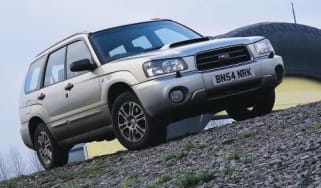 When my new four-wheel-drive Forester 2.5 XT long-term test car was delivered to Evo Towers, the first fall of winter was swirling around outside my w…
Visit/subaru/forester/6265/subaru-forester 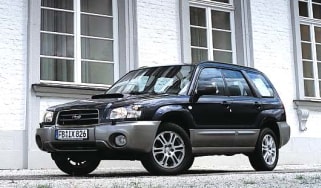 More power, extra kit and an even more supple ride add to the charms of our favourite SUV
Skip to HeaderSkip to Content