Roomier, less thirsty, but not as appealing 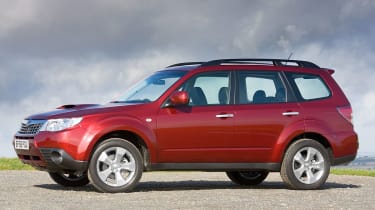 It’s safe to say we’re rather fond of the old Forester here at evo. It was the soft-roader that wasn’t naff, the 4x4 that wasn’t conspicuously excessive. Above all, though, it was an entertaining drive too.

Worrying, then, that the third-generation Forester has grown. It’s both longer (by some 95mm) and taller and, well, quite a bit closer to being a full-size SUV. Still, at least that means more space inside, in a cabin that has been improved, even if it’s still far from glamorous.

Perhaps more interesting is the recently launched 2-litre turbodiesel boxer, which, it’s anticipated, 80 per cent of Forester buyers will opt for. It thrums nicely, promises 44.1mpg on the combined cycle, and shifts this 1550kg Scooby along faster than its 10sec 0-60mph time would suggest.

The bad news? The Forester now feels less like the Impreza it is based on and more like an SUV. You sit higher, which only emphasises the pitching and rolling, while the slightly slow steering ratio does little to encourage enthusiastic driving.

Subaru says the new Forester has the likes of Honda’s CR-V, Nissan’s X-Trail and Toyota’s RAV4 in its sights, which perhaps completes the picture. No doubt the Forester’s new audience will find much to like, but for people like us, it’s lost much of what made the old model special.