SEAT has taken a while to join the ever-growing family SUV market, but thanks to the Volkswagen Group’s MQB platform it’s been able to do so with relative ease, and now offers a competitive alternative in a market virtually overrun with alternatives.

Importantly, it’s also fairly good to drive, feeling not unlike a slightly raised SEAT Leon (which is essentially what it is) and offering at least a small selection of engines that help the Ateca get the best from its chassis. The range-topping 2.0 TDI models also come with all-wheel drive, which expands the Ateca’s range of abilities, and the range is soon to include a Cupra model which should add something the Ateca is currently lacking: excitement.

We’d still opt for one of SEAT’s wide range of Leon models over the Ateca - physics, and indeed styling is on their side - but if you’re in the market for a small SUV then the Spanish car is probably one of your better options right now. 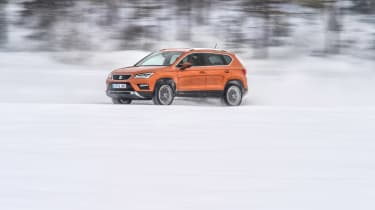 > Performance and 0-60mph time - We’ll have to wait for the Cupra model to see what the Ateca is capable of, but 2-litre diesel and 1.4 TSI models are still respectably brisk.

> Ride and handling - Not quite a budget Porsche Macan, but good body control, direct steering and secure roadholding. Ride is firm but not uncomfortable.

> MPG and running costs - Diesel models top the MPG charts but the 1.4 EcoTSI gets close. 2.0 TDIs may prove almost as frugal as the smaller, harder-worked 1.6 TDI in the real world.

> Interior and tech - For Ateca, see Leon - cabin is much the same, but you do get a better view of the road. SEAT’s focus on younger buyers means tech levels are good.

> Design - Instantly recognisable as a SEAT, but no design classic. At its best in brighter colours. 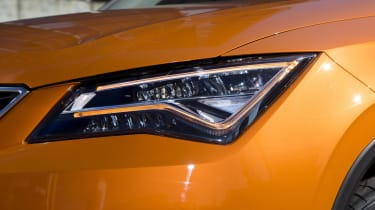 SEAT’s first SUV kicks off at £17,990, which looks expensive until you realise that an optioned-up supermini can quite easily hit that sort of number these days. That’ll get you a 1.0 TSI in basic S trim, which probably isn’t showing the Ateca off in its best light, but equipment levels are still decent regardless: 16-inch alloys, a 5-inch touchscreen, a height-adjustable driver’s seat, a leather-trimmed steering wheel, and air conditioning.

£20,125 gets the same engine with SE trim, which bumps you to 17-inch alloy wheels, an 8-inch touchscreen, Full Link infotainment, cruise control and dual-zone climate control, among other things. £22,020 moves up to SE Technology, which adds another inch to the diameter of the wheels, full LED headlights and navigation, while £24,440 gets Xcellence trim (from the 1.4 EcoTSI and up) with flashier 18-inch wheels, leather trim, keyless go, multi-colour interior ambient lighting and various other tricks.

The Ateca isn’t short of potential alternatives. Closest is the Skoda Kodiaq, which sits on the same MQB platform and looks not unlike its Spanish equivalent, but does offer the option of an extra pair of seats (and some extra visual bulk to go along with them). The smallest engine available in the Kodiaq is a 1.4 TSI (in a lower state of tune than the SEAT’s) and it has a higher entry price as a result (£21,495), but it’s not quite as entertaining to drive. Also similar is Volkswagen’s £23,140 Tiguan.

Want a left-field or budget choice? Try the Suzuki Vitara from £14,999, or even the MG GS, which is a fiver less than the Suzuki. 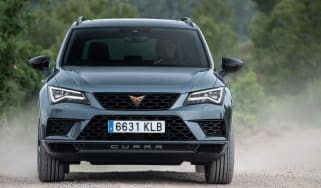 New Cupra Ateca review - how does the first of SEAT's new Cupra brand stack up?

SEAT launches its new Cupra brand with a pragmatic product – a sporty SUV, but it's the Leon we're waiting for...
Visit/seat/ateca/17826/new-seat-ateca-2016-review-good-looks-and-great-build-quality-but-lacking-in 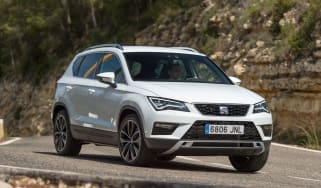 The Ateca is a fine looking car, especially for an SUV, but a raised ride-height is rarely beneficial for dynamics
Skip to HeaderSkip to Content