The Ateca is a fine looking car, especially for an SUV, but a raised ride-height is rarely beneficial for dynamics 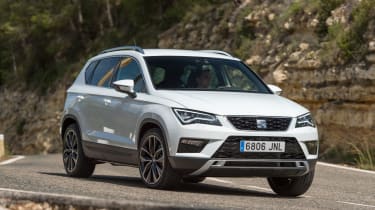 This SEAT Ateca is its first SUV. The Ateca is based on the latest VW Tiguan and it’s got its sights firmly set on taking sales from Nissan’s über-successful Qashqai.

Based on looks alone, the Ateca would easily take the title of best small SUV. Its sharp lines and short overhangs, typical of all current SEATs, make it a handsome beast. In a market mostly populated with dumpy and grotesque eyesores, we can’t wait to see a few more Atecas on the road.

The car we tested was equipped with the 148bhp, 2.0litre diesel engine. The second most powerful of the two oil burner options. It’s not remarkable, but then it isn’t offensive either. It revs to 4500rpm, which is typical diesel territory. It produces 251lb ft of torque from 1750 to 3000rpm. This helps the Ateca reach a 0-62mph time of 8.5sec. Nothing particularly exciting, but it makes the Ateca fast enough.

The gearbox is smooth and has a satisfyingly short throw. It’s sometimes difficult to engage second quickly enough before a corner. This is mostly down to how difficult it is to heel and toe. Not something many Ateca buyers will worry about, I know, but the engine’s dull responses mean rev matching is difficult. All is not lost though, as the engine actually copes better left in third, its low down torque gently pulling you out of corners. Acceleration rarely feels more severe in second; you’re just accompanied by more noise. 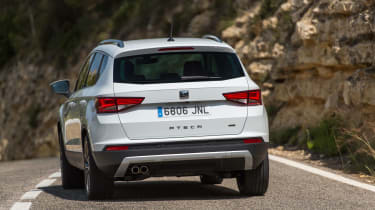 The top spec diesel Atecas, like the one tested, are all wheel drive. They use the tried and tested, by the VW group, Haldex system.

It isn’t a permanent four-wheel drive system, instead using a clutch at the rear axle to engage the rear wheels when grip is compromised at the front. The system has received harsh criticism in the past. Now in its fifth generation, it’s a different story and it’s helped make cars like the VW Golf R and Audi RS Q3 more exciting than a lot of their rivals. And thankfully, the Ateca uses the same Haldex system albeit with less power to restrain.

The Ateca plods its way down a road feeling very taught and robust. Despite wearing a relatively low profile tyre, especially for an SUV at 245/40 R19, the ride never felt brittle. It isn’t sumptuous and soft, remaining firm at all speeds, but find some big bumps or dips and it becomes clear there’s enough suspension travel to deal with some of the worst roads.

It may not be the most comfortable then, but there’s a real quality to the way the Ateca deals with an undulating road. That quality is continued to the interior too. The car we drove was finished with a brown centre console and brown Alcantara seat centres. It was so refreshing to not be surrounded by Teutonic acres of black, but sadly this finish won’t be available in the UK. However the finish, materials, and quality are exceptional, and they will be available this side of the channel.

The exterior’s clean and sharp look has been carried over to the inside too. It’s a very cohesive design, even the switchgear following the same aesthetic principles.

The seat does feel too high, but I suppose this is to be expected for an SUV. There isn’t quite as much movement in the steering column to find my desired driving position, but that’s the only criticism of the interior.

Hunt out some corners and the Ateca finds some real agility. It may well be subconscious, but there’s a perceptible feeling that there’s a lack of bodywork at the rear. The Ateca looks more like a hatch than a traditional SUV and it does feel more like a jacked-up hatchback.

It dives into corners quickly and sharply. The over zealous traction control is all too willing to cut in. Disable it as much as you can, and you can rely on the Ateca’s natural stability. The traction control and ESP can’t fully be turned off, but it’s not like there’d be much fun to be had if you could. 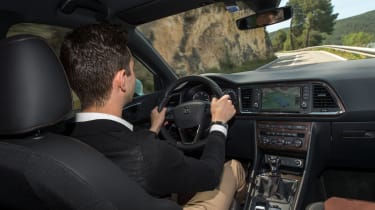 Corner entry is where the Ateca feels most fun. There’s nothing especially bad about how the Ateca manages the rest of the corner; it’s swift, efficient and neat. Those attributes don’t translate to ultimate enjoyment, sadly.

On the road, the SEAT never feels four-wheel drive. During long corners the front will push into understeer if you carry too much speed. You can really lean on the rear tyres in slower corners, but there isn’t enough grunt from the engine to worry the tyres.

If you were used to a SEAT Leon (Cupra versions aside) the Ateca would feel very familiar and little has been lost dynamically with the extra ride-height.

Nissan’s Qashqai is the biggest selling SUV in the UK, by quite a large amount – it’s the fifth best selling car in the UK of 2016 so far. But it’s hardly a looker, the engines are uninspiring and it doesn’t posses the level of quality and detail that the Ateca does. The basic car is also slightly more expensive at £18,545.

The only other mini-SUV that can match the style of the Ateca is the Range Rover Evoque. However the basic Evoque is £30,300, and even the top spec Ateca Xcellence isn’t that expensive. 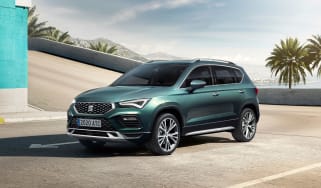