If you’re at all familiar with the current generation SEAT Leon then you’ll quickly adapt to the Ateca, whose dashboard and general ambience are pretty much identical. There’s a raised driving position of course, though this is relatively subtle - no Range Rover-style commanding view here, and you sit little higher in relation to the dashboard then you do in a Leon. The slightly raised position does give you a better view of the road however, which some drivers may prefer. 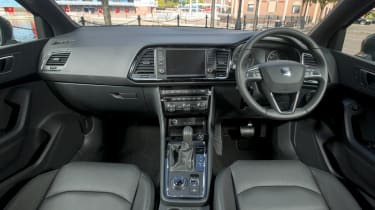 SEAT has made in-car technology one of its primary missions over the last few years - a situation not unrelated to it having one of the youngest ownership pools of any mainstream manufacturer - and the Ateca is reasonably well-equipped as a result. A 5-inch Media System Touch with MP3 and USB is standard from the S model, but trading up to SE improves that to an 8-inch Media System Plus setup adding Bluetooth and voice control, eight speakers rather than four and Full Link connectivity - compatible with MirrorLink, Android Auto and Apple CarPlay.