The quickest Ateca is unsurprisingly the one that’ll cost you to the most to buy; with 187bhp, all-wheel drive and a dual-clutch transmission, it’s the top 2.0 TDI that delivers the quickest acceleration figures, sprinting to 62mph in 7.5 seconds. It’ll eventually reach 132mph too, 10mph more (and 1.5 seconds quicker) than the 148bhp 2.0 TDI that sits below it in the Ateca lineup. On the road, both diesels feel fairly brisk, if not particularly entertaining to drive, but they do offer plenty of torque from low revs so it’s not difficult to get along the road at a decent pace.

SEAT’s (or to be specific, the VW Group’s) 1.4-litre EcoTSI four-cylinder petrol is the kind of engine you’d opt for instead were it not for greater fuel costs. It’s a more lively powerplant than the diesels, and smoother and quieter too, with enough urge to propel the Ateca from 0-62mph in 8.5 seconds (8.6 if you opt for DSG) and on to 125mph (or 123mph, with the auto). We’re yet to confirm if the weight benefit (at 1349kg in manual form, it’s over 200kg lighter than the 2.0 TDI overall) makes it the better handler too, but it could prove to be the choice for family buyers unwilling to sacrifice a bit of back-road fun. 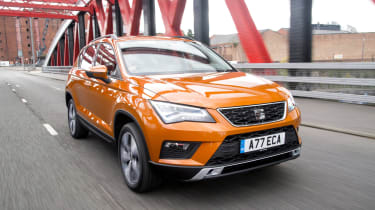 The 1.0 TSI and 1.6 TDI languish at the bottom of the Ateca performance pile, but of the pair the three-pot petrol is the quicker and also the more interesting. We’ve tried the engine in other VW Group products and it’s a game little unit, happy to rev to the red line and smooth as it does so. 0-62mph here comes up in 11 seconds, with up to 114mph achievable, though it’s an engine for which we’d recommend caution as it may have its work cut out to carry a full complement of passengers and luggage.