Ride quality will probably be the priority for Ateca buyers, and even on larger wheels - up to 245/40 R19 on some models - SEAT’s SUV has a surprising level of pliancy over most surfaces, only becoming troubled over harsher bumps and ruts. Decent suspension travel helps here, as does a rigid structure, offset against an otherwise relatively firm setup that helps give the Ateca a little sporting appeal.

It’s surprisingly agile too, despite a relatively hefty kerb weight by the time you reach the 2-litre diesel models. That most of the mass is between the wheelbase helps, with small overhangs, particularly at the rear, that gives the Ateca the look and feel of a jacked-up hatchback rather than a traditional SUV.

The steering feels much the same as SEAT’s other offerings, and indeed many cars across the Volkswagen Group. Turn-in is crisp, and there’s plenty of grip too, though you’re aware of how the car is behaving more from visual cues and through the seat of your pants than any information filtering through the steering. Corners are dealt with efficiently, but without any real verve. 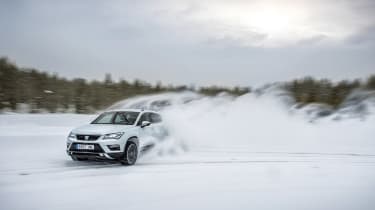 Top models equipped with all-wheel drive have more than enough traction for any encounter you’re likely to face on public roads. The Haldex clutch-based setup is front-biased in normal driving, able to transfer up to 50 per cent of the engine’s torque to the rear wheels when required.

This power-shuffling is largely hidden on dry roads, but a recent drive of the Ateca on ice and snow revealed it’s as effective at dealing out power as you’d expect when the surface becomes really slippery. As soon as a front wheel begins to slip the power is transferred to the wheels with more grip - the idea being to keep you on the straight and narrow, rather than to shuffle torque to the benefit of driving fun.