Like other current model SEATs the Ateca is a handsome car, if not a particularly striking one. There’s a heavy hint of Leon about the Ateca’s lines, though the rising and falling swoops and slashes of cars like the Ibiza and Leon are replaced by a constant shoulder line. As you’d expect on an SUV, there’s a higher level of unpainted plastic body cladding too, though SEAT has resisted the temptation to go full rufty-tufty off-roader and maintains a level of sophistication. 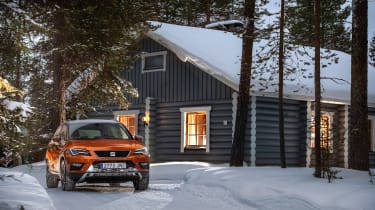 SEATs are at their best in more interesting paint shades however, and that also applies to the Ateca. Steer clear of whites, silvers and blacks and opt for Samoa Orange (£650), Lava Blue (£575) or Mato Brown (also £575) and the Ateca adopts a little personality. Several exterior upgrades are also available to jazz up the plainer paint shades, letting you add splashes of blue, red or orange. The same can be said of the interior; it’s a perfectly pleasant space as-is, but a £281 “interior decorative set” lets you swap plain black dashboard plastic inserts for something a little brighter.