You’ll not find too many surprises in the Ateca’s engine and transmission lineup, perhaps the presence of a 1-litre, three-cylinder engine being asked to pull along what appears to be a fairly substantial car. It’s up to the task on paper, putting out 113bhp and a more relevant 148lb ft of torque, for a kerb weight of 1280kg.

With the torque figure delivered at a typically low 2000rpm the emphasis is on easy-going performance; while we’ve not yet driven the 1-litre Ateca, we have used its engine in the Skoda Octavia, a car that weighs around 100kg less. It’s a lively engine in the Octavia, bright and refined and willing to rev, but as with that car we suspect the Ateca won’t be at its best once you start loading in people and things.

For this, you might wish to trade up to the 1.6 TDI. Its peak power figure is identical, albeit produced at 3250rpm rather than 5000rpm, but with 184lb ft of torque from 1500rpm it’s able to work harder sooner. The VW Group’s 1.6 TDI motor isn’t nearly as pleasant to use as the tiny petrol unit and we’d not recommend it if you’re using the car for town-based duties, but it may be the bare minimum for heavy family use. 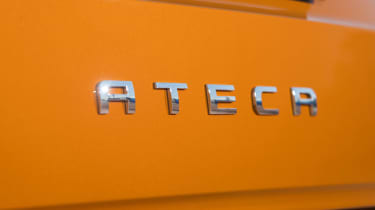 Next up is the 1.4 EcoTSI petrol, making 148bhp at 5000rpm and the same torque output at the same engine speed as the 1.6 TDI. The four-cylinder unit spins freely and has the ability to deactivate two cylinders on light loads to the benefit of economy.

Topping the range are a pair of 2-litre four-cylinder turbodiesels, one producing 148bhp and 251lb ft at 1750rpm, and the other 187bhp with 295lb ft of torque at the same 1750rpm. Both come with 4Drive all-wheel drive as standard (the only Atecas so equipped), with a six-speed manual transmission on the lower-power model and a seven-speed DSG for the 187bhp car. The 2-litre diesel is the most adept at hauling along the Ateca’s mass (by this point, up to 1610kg at the kerb) and while it’s not the most responsive or playful of engines it is at least torquey and relatively refined.

DSG is also available on the 1.4 EcoTSI, but otherwise a manual transmission is standard across the Ateca range.