Skoda Kodiaq review - Eminently practical, but is this new SUV enjoyable to drive? 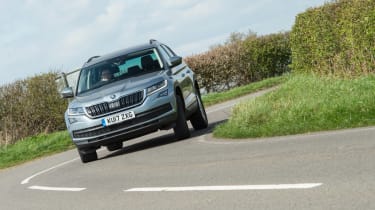 The Kodiaq is a pivotal car for Skoda, taking it confidentially into the burgeoning SUV market with the brand’s trademark blend of qualities: discreet styling, generous specification, and lots of metal for the money.

Skoda has understandably played it safe with every aspect of the car – more so than it did with the unusually-styled Yeti when that first joined the market. Based on the same platform that underpins the VW Tiguan and SEAT Ateca (a variant of the ubiquitous MQB also used in everything from Golfs to Audi TTs), the Kodiaq is a smartly, if predictably, styled five- or seven-seat SUV crossover.

> Click here to read our review of the SEAT Ateca

To be honest, there’s nothing here that’s going to make your jaw drop. Engines and gearboxes are shared elsewhere with the VW group, while the second row of seats slides back and forth, and the optional third row (a £1,000 extra on lower spec models) rise out of the boot floor. A full suite of driver assistance systems and Skoda Connect online capability tick all those de rigeur tech boxes, while the latest 8in glass-fronted infotainment system is impressively slick.

There are largely no surprises with the engine line up, either – save for the inclusion of a new efficiency-biased 2-litre TSI petrol motor that makes its Skoda debut here. Otherwise, it’s the 1.4-litre TSI in 123bhp and 148bhp guises, or the usual 2-litre TDI options in 148bhp and 187bhp states of tune. An on-demand Haldex 4x4 drivetrain and DSG twin Clutch ‘boxes are available on most models except the entry level 1.4, and are the only option on the most powerful variants. 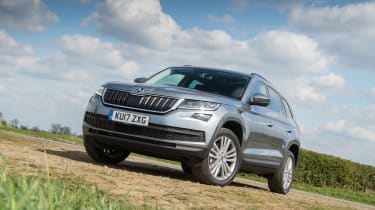 It’s the 148bhp 2-litre TDI that’s predicted to be the best-seller, for obvious reasons in a car like this one, and it’s entirely adequate for the job. Smooth, mostly refined, and with enough torque for effortless everyday driving, 0-62mph takes anywhere between 8.9 and 10.2 sec depending on drivetrain, gearbox, and whether it’s a 5- or 7-seat model. Don’t expect any sparkle though. The 187bhp 4x4 DSG model has a useful excess of performance in every situation and is therefore considerably more appealing – but at a price. Its delivery also suits the DSG ‘box.

We also drove the 2-litre TSI engine that possesses a claimed 0-62mph time of 8.0 sec. In practice it doesn't feel quite that brisk. A hefty kerb weight takes some of the sting out of the 178bhp petrol's tail and even in Sport mode responses aren't that eager and it's not inclined to hang onto gears for too long unless your foot is all the way to the floor. Better to leave the car to its own devices and appreciate its better characteristics: Smoothness and silence.

Overall, the diesel still makes more sense: with this particular Kodiaq weighing up to 1,739kg (in seven-seat form with a driver; the lightest Kodiaq is the 1.4 FWD at 1,427kg without driver), it’s torque that matters.

From an evo perspective there’s not a great deal to be said about the Kodiaq. It is good at doing exactly what it needs to do, and hence will probably sell well.

The steering is accurate, light and completely de-sensitised. In Sport mode it's accurate, slightly less light and remains de-sensitised, but also adopts a slightly rubbery feel. The chassis – tuned to be a little firmer than other Skodas - balances grip, roll, and ride comfort respectably, particularly with the optional adaptive dampers (DCC), but offers no enjoyment. The manual gearshift is light and slop-free, but DSG is a sensible addition. 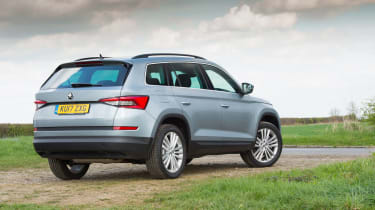 Towing, yes, there’s an evo angle there; all-wheel drive 2-litre TDI variants can haul trailers of up to 2,500kg weight (other models are 2,000kg), which is more than enough whether you’re trailering that tatty MX-5 track hack or a 1973 Lola T330 F5000 car. There’s even a ‘Trailer Assist’ function that takes the sweat out of that last bastion of male pride, the awkward trailer-parking manoeuvre.

At 720-litres the Kodiaq’s luggage area is the biggest in its class, more than enough for a couple of tool boxes, some jerry cans and an assortment of Hewland gear ratios for the Lola.

With the second row of seats folded flat the volume rises to a massive 2,065-litres, but with them up your spanner-wielding mates will certainly appreciate the leg and head room on offer. Even if it’s a trip out to the ‘Ring, with the seat base sliding fore and aft, as well as the seat backs reclining, the Kodiaq is more limo than mid-size SUV.

There’s even an optional 230v socket back there, one of just many ‘Simply Clever’ touches that include two umbrellas, and a torch in the boot. Overall the cabin feels nicely put together, with decent materials, if a little dour in execution. It does a great job at isolating outside noises though, with admirable refinement.

This market segment, like most of the SUV world, is white hot at the moment. The Kodiaq range is priced from £21,565 for the entry 1.4 TSi model to £34,895 for the tech heavy 2.0 TDI 190 4x4 DSG Edition seven-seater. Rivals are plentiful, but the Kodiaq looks spacious and good value next to, say, a Land Rover Discovery Sport.

Some may consider SEAT's slightly more compact Ateca if the Skoda is already on their list. With less weight to carry (it starts from 1280kg) the SEAT's engine range tends towards slightly smaller units, though a 2-litre TSI has just become available with the Ateca FR. As you'd expect from SEAT though, the Ateca is better to drive – nimbler and slightly more engaging, if not the scaled-down Macan you might hope for.