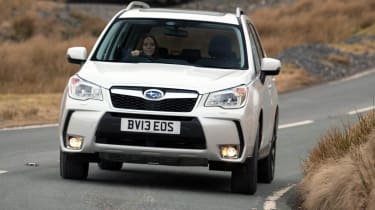 The Subaru Forester enters its fourth generation. Not that long ago the Forester was evo’s favourite SUV. It was all the things that 99 per cent of this breed are not: utilitarian, understated, characterful, compact, relatively light and enjoyable to drive. We even had one – the Japan-only STI version – on Car of the Year in 2005. This new version has a lot to live up to, then. Especially as it’s bigger, heavier and much more conventional than those that have gone before. Prices start at £24,995.

The Forester has never been a looker (it is a Subaru, after all), but it was distinctive and trod its own path… The new model could be any slightly gawky mid-sized SUV. Not a great start. At least the 2-litre boxer four-cylinder engine is sacred. There are three engine options, all horizontally opposed fours: a 2-litre turbocharged diesel with 145bhp and 258lb ft from £24,995, a 2-litre normally aspirated petrol with 148bhp and 146lb ft from £25,495, and the range-topping turbocharged XT petrol with 237bhp and 258lb ft from £30,995. As if to highlight the Forester’s unique attributes, that most powerful petrol engine, which is currently more potent than the Subaru BRZ sports car, is set to make up more than 25 per cent of total sales.

It might be powered by the good stuff but it’s slightly hobbled by another acronym that is enough to make any enthusiast let out an involuntary groan: CVT. Yes, a braying, slow-witted and heinous continuously variable transmission, albeit with paddle-shifters if you want to flick between six pre-determined ratios – or eight in the most aggressive S# mode. The CVT ’box also marks a change from the lowlier six-speed manual car’s 50:50 torque split to a less-appealing-sounding 60:40 front/rear split. The less powerful engines come with a six-speed manual transmission as standard, with the CVT optional on the 148bhp petrol.

The view out of the vast windscreen and the relatively slim A-pillars is terrfic. It’s like the McLaren 12C philosophy scaled up to IMAX and it is some compensation for the Forester’s swelling girth when threading along narrow lanes.

On the move, the CVT ’box is predictably horrid, sitting at constant rpm when you floor the throttle, for example. Fortunately the engine is pretty refined, but you’d never know it was a flat-four, as it emits a thin, tuneless note and only feels 237bhp-strong when worked really hard. Things are slightly better in S#, but even with eight tightly spaced ratios to play with, the performance feels lukewarm and the shifts are blurred rather than crisply defined.  It’s not a promising sign for those who specify the new Subaru WRX saloon with its optional CVT gearbox.

By comparison, the Forester diesel’s manual gearchange is mechanical and satisfying; it will involve and gratify those who appreciate such things but won’t offend or obstruct the progress of those who don’t. The oil-burning engine is refined and quiet most of the time, only reaching high volumes under heavy acceleration and at cold start-up. And while it never lets you forget its power source, there’s a more characterful thrum than typical in-line four-cylinder units.

It’s an engine that demands work from you, though. There’s little accelerative shove below 2000rpm, with fair bit of turbo lag especially in higher gears. There’s a typically punchy diesel mid-range and acceleration is brisk if you change gear suitably, though this will be alien to those used to the low-effort nature of torque-rich VAG or BMW diesels. In many situations you’ll be a gear lower than in German rivals, perhaps two gears up steeper hills.

Dynamically, there’s some Forester DNA intact here – the suppleness, the noticeable but ultimately controlled body roll and the lucid sense of weight transfer that it brings, the light but accurate steering and the feeling that this is an SUV that’s about more than just tied-down grip and blunderbuss performance. Sadly, the balance is rather option-free understeery in the end, despite the promise of an electronically controlled multi-plate transfer that can apportion more power to the rear wheels.

Listing each of the Forester’s SUV rivals would take a long time – very few mainstream manufacturers fail to occupy the mid-size 4x4 segment and nearly all of them have a selling point that will appeal to someone. If you want real off-road ruggedness, a Land Rover Freelander should satisfy, while if its style and a high-riding interior you seek then a VW Tiguan or BMW X3 is likely to appeal more.

For evo, the Skoda Yeti is the unlikely hero of a market that doesn’t typically strike a chord with our ethos. Its mixture of practicality, value, subtle styling and genuine dynamic ability (as well as a sprinkling of off-road ability that should suit all but the most committed buyers) give it the sense of honesty we first gleaned from the Subaru Forester when it first launched in the late 90s.

Inside, the Forester is no Range Rover Evoque. There’s an uncouth mixture of display screen styles and fonts and the Bluetooth is unfathomable. The plastics are a bit shiny and hard, the rubber floor mats look like they could be hosed down and overall the Forester exudes a simple toughness. Or a cheap ugliness, depending on your point of view. The Forester’s huge glass area, big doors and no nonsense shape will make it a more useable and appealing SUV than a chintzy Q5 or X3 to many, though its feel-good factor is inevitably lower.